Wrappers is the third baseball card store in Jinbocho and is my favorite of them.  I had originally visited this store in 2013 at their previous location in Akihabara.  Their new location is in on the sixth floor of the Musashiya Building on the south eastern corner of the intersection between Yasukuni-dori and Kijibashi street just to the west of the Jinbocho subway station.  It's also about a seven minute walk from Mint Kanda.  Here's a photo of the building: 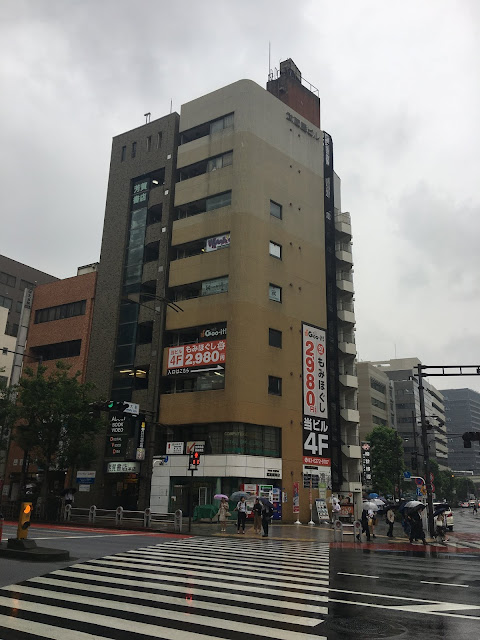 I had plans to meet up with Dan here on a rainy morning and ended up getting here first.  Not knowing better, I went up the stairs on outside of the right side of the building.  When I got to the sixth floor I was greeted by a locked door that had no markings on it.  Puzzled, I went up another floor to see if I had miscounted but the store wasn't there either.  I went back down the stairs to wait for Dan.  When Dan arrived, he explained my mistake - there was an elevator that we needed to take up to the sixth floor.  The stairs I went up were essentially the emergency exit.

In my defense, it wasn't obvious there was an elevator. Here's the entrance that you use to get to the higher floors in the building (it's the one on the left): 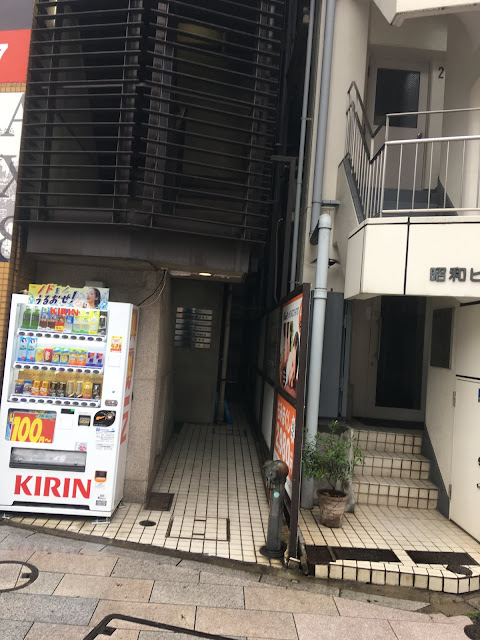 Wrappers has the most diverse inventory of any store I've been to in Japan.  Beyond the usual BBM, Epoch and (at least recent) Calbee singles, you can also find singles here for more obscure issues from the turn of the century like Future Bee and DigiCube.  I also found singles for this year's Buffaloes team issued set, the BBM/Nippon-Ham Home Run sausage cards from the last few years and some Glico Tigers cards from 2003-ish that I'd never seen before.  Their BBM flagship singles go back to 1991 and they also have singles from most of the other BBM sets - I picked up some 1997 flagship, some 1999 Tigers team set cards and some 2004 1st Version "Asian Championship" cards here.  I also picked up the final Epoch NPB card I needed here.  Dan picked up some cards of Korean NPB players Dae-Ho Lee, Chang-Yong Lim and Seung-Yuop Lee here along with some Gravure Idol cards.

The store takes credit cards.  Ryan says that the price for commons here is usually 50 yen so it's a good store for doing set building.  They also have unopened boxes and packs and there's a couple tall display cases containing hits.  Here's a couple pictures of the interior of the store (and one features Dan again): 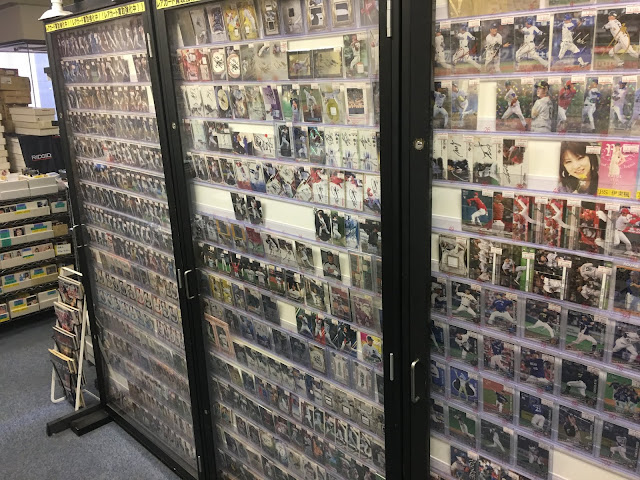 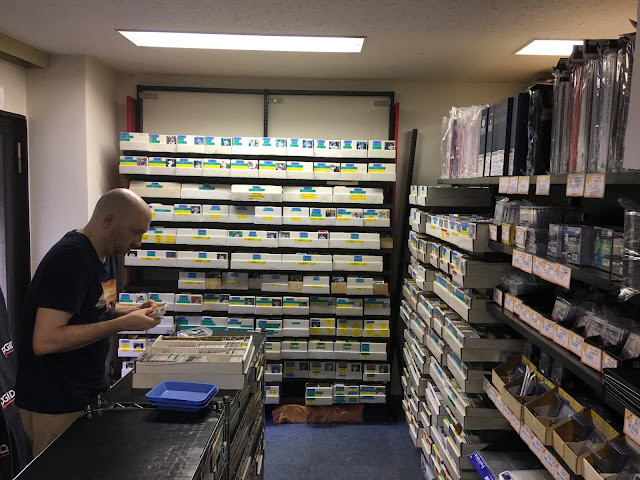 This is among my top five favorite stores in Tokyo, if not all of Japan.  Definitely worth a visit, especially if you're looking for something a little more obscure.

Interesting series here! It's nice to know card shops are still having success, no matter the country.

I love that wall of shoeboxes and super shoeboxes! If I had a mancave, I'd want to install something like that to store my collection.

Always a great time. Love that you're helping people find the shops. Also I look gross.

Hiya, really appreciate you doing this blog, very helpful for finding different card shops (for me, in the Tokyo area). On Wrappers, do you recall if they also had a number of boxes of MLB singles, as I'm planning a day trip to hit a few shops in Tokyo on the hunt for MLB cards.

@Ben - I don't remember if Wrappers had MLB singles or not as I wasn't looking for them. I'm pretty sure Quad Sports and Mint Ikebukuro do but I would recommend you contact Ryan of "This Card Is Cool" as he knows the stores better than I do.

Ben: I've never seen MLB cards there. I have seen minor league cards in the past, but they were very few and that was when they were in Akihabara.

I should note that in the past couple of months, they have rearranged the store a tiny bit. I think the owner is trying to clean up/organize the cards that have not yet been displayed from the Akihabara store; their complete sets especially have been under blankets and tarps in a big pile. In fact, my last two visits, the entry area to the store has been a bit of a disaster area. They're still offering new set singles and all that, and hopefully they get the store fully situated soon. I have a feeling there's some extra space in the "back" too that they can open up into. When I first visited Wrappers in Akihabara, they had a much bigger store with lots of inventory that now seems to either be tucked away or even completely gone.

Also, I don't know if this is permanent or just a temporary problem, but I believe they've stopped accepting credit cards.

The layout of the store had struck me as kind of weird as it's laid out kind of "L" shaped so I agree that he's probably got more space than he's currently using. And it does seem much smaller than the old location.