In addition to the Nippon-Ham "Home Run Sausage" cards I picked up some other cards that were given away with food on my trip.

To be honest I'm just assuming these first couple cards are from a food related set - I had never seen this set before.  I found these cards at Wrappers in Tokyo and decided to pick up two of them.  Glico is a Kansai-based Japanese confectionary company so I assume they were some sort of giveaway with candy.


The cards are translucent plastic so they don't really have backs - here's what the flip side of the Hamanaka card looks like: 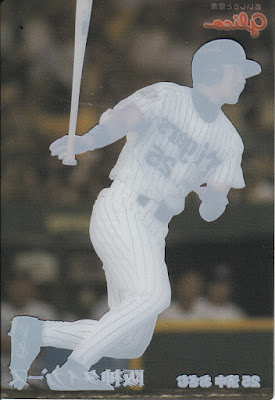 I've talked about the 2010 Georgia Coffee cards before - BBM issued this set as a giveaway with cans of Georgia Coffee.  I picked up a handful of cards from this set from Mint Ponyland in Nagoya:

The cards are smaller than the standard size - they're about 2 3/4 inches high by 2 inches wide.

In a similar vein in 2016 Epoch and the Kabaya company (as in Kabaya-Leaf) issued a 36 card set that was given away with banana flavored gum called "Central League Gum".  The cards featured only Central League players (6 for each team).  I'm not sure but I think I got the Sawamura card at Mint Ponyland and the Ohsera card at Mint Umeda in Osaka.


One of the things I tried to be on the lookout at the ballparks were player bento boxes.  These are meals issued in boxes with a particular player's photo on it - I think the meal is usually supposed to be the player's favorite meal.  I had heard that frequently there would be a card or cards of the player included with the box so I was definitely interested in seeing what I could find.

I didn't have a lot of luck though, mostly due to the language and my impatience with crowds.  I got a bento box for Yoshio Itoi at Koshien Stadium at my third NPB game but it didn't come with a card: 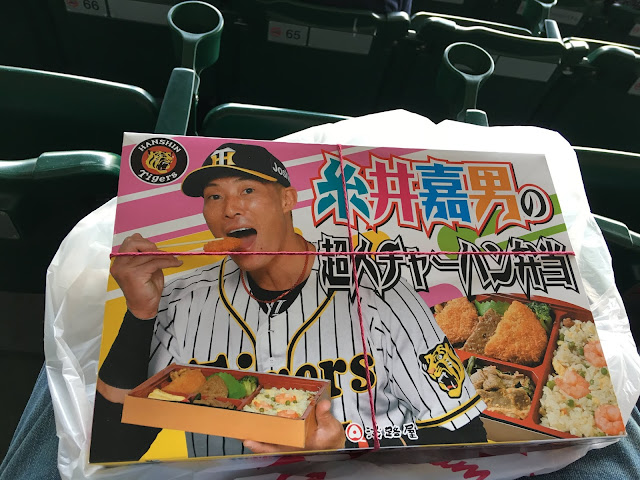 Food was good though.

I sort of got a player related meal at Fukuoka Dome a few days later.  I got a burger endorsed by Alfredo Despaigne at a Freshness Burger stand.  It was basically a cheeseburger with guacamole on it.  It wasn't bad but it didn't come with a baseball card.

I screwed up at Seibu Dome a few days later.  I had found a stand selling player bento boxes outside the ballpark and had seen that they came with cards.  I had decided on the Tomoya Mori box and decided that I would buy it inside the ballpark.  Once inside though I discovered that the stand I had seen outside was apparently the only one that sold the boxes.  I could have gotten my hand stamped and gone back out but I decided I didn't want to fight against the crowd flow coming in so I settled for something else for dinner.

I was finally somewhat successful the next night at Chiba Marine Stadium.  The Lotteria stands at the ballpark sell meals that include a silver pack containing one oversized (5 inches by 7 inches) card of a Marines player.  I bought a cheeseburger meal (including fries and a drink) and got a card of Tatsuhiro Tamura: 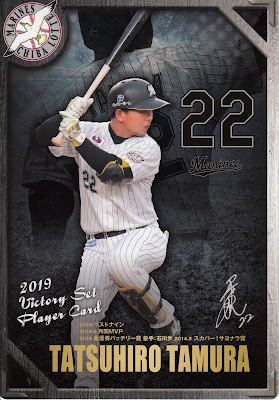 I was finally successful at the last NPB game (well, last ichi-gun NPB game) I went to.  At Jingu Stadium for a Swallows game I bought a bento box for Norichika Aoki: 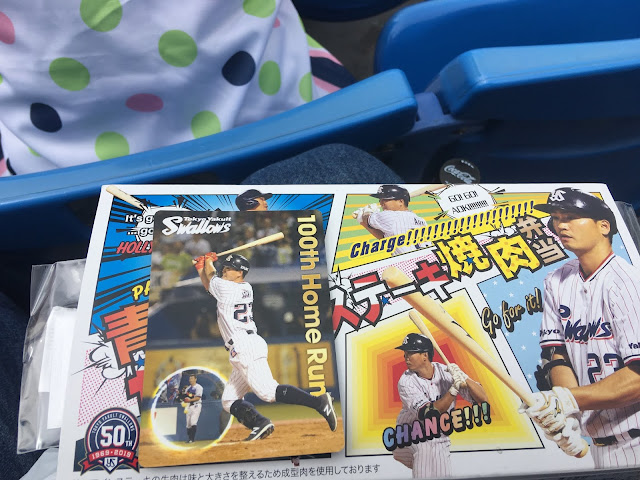 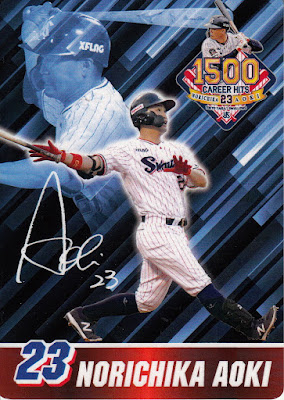 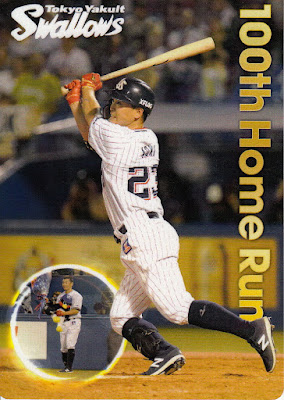 Food related cards were one of the things I had wanted to keep my eyes out for so I was happy I had come across some.  I'd have been happier if I'd gotten a Lions bento box and I was also disappointed I didn't find any of the Meito "Central League Home Run" popsicle cards from last year.
Posted by NPB Card Guy at 5:50 PM

I wish there were more food related cards here in the US.
I had my first bento box a few years back. Tasty!