G-Freak is located a couple blocks south of Okachimachi Station which is on the JR Yamanote Line in between Akihabara and Ueno Stations.  It's on the second floor of a jewelry store which doesn't really help narrow down its location as this area seems to be rife with jewelry stores.  It was raining and dark the evening that I went by this store so I didn't get a photo of the outside of the building.

The good thing about this store is that it is packed to the gills with cards.  The bad thing about this store is that they aren't organized in any manner other than by team.  Basically each box you find here contains a bunch of random cards for a particular team.  These cards could be base cards, inserts, parallels or promos (although I don't think I saw any of the more rare, serially numbered parallels in the boxes I looked through) and aren't really pinned down to any particular time period (although most of their stuff is from the 1990's and later).  This isn't a store to stop by if you're in a hurry or if you're looking for something specific.  They have hits in display cases and other odds and ends but I didn't pay a lot of attention to them.

I had stopped by here with Ryan back in 2013 and I didn't really think much of the store.  I was in kind of a bad mood that day and was too impatient to take the time to really look at much, although I did pick up some good stuff.  As a result I put off coming by here until my last evening in Japan - visiting here was a "stretch goal" for the trip.  It turns out that this was really unfair to the store - I ended up having a great time going through some boxes and finding some interesting cards.  I went through boxes for the Dragons, Carp, Lions and Tigers and picked up a Lions team issued card of Tsutomu Itoh, a 1993 Kanebo card of Kenjiro Nomura, a 2003 BBM Sluggers card of Makoto Kozuro, a 2013 BBM Tigers card featuring Shintaro Fujinami and Kiyooki Nakanishi and a mid-70's "card" of Gail Hopkins that turned out to be a matchbook cover.  Total cost was 300 yen.

Beyond the cards, I also had a great time here talking with the owner and another guy in the store (not sure if he worked there or was another customer or just a friend of the owner).  I was here the evening after I had gone to the Fighters' farm team game in Kamagaya and they had the rebroadcast of the game going on the TV in the shop - they were very amused to discover that I had been at the game.  I was actually having a hard time explaining that I had been at the game until I pulled my ticket stub out.  The owner spoke English pretty well (as always it was MUCH better than the limited Japanese I know).  He was kind of excited when he discovered I was from the Baltimore area and made sure I saw what he called his "pride and joy": 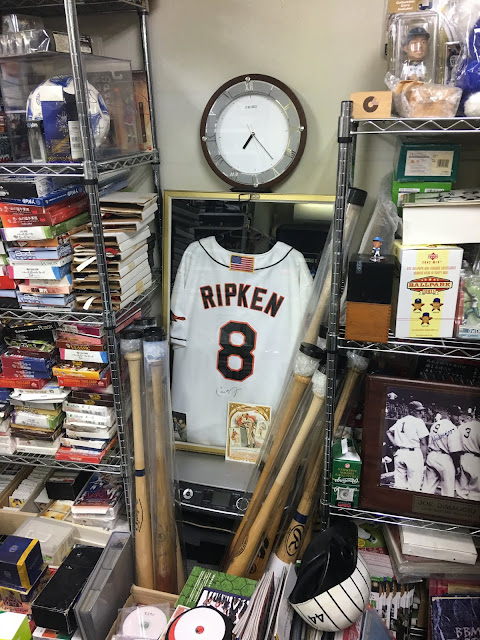 He said he'd gotten Ripken to autograph it on one of the MLB All Star tours in the mid-90's.  I mentioned to him that when I had come by his store in 2013 he had a Ray Lewis jersey in the window.

Here's a couple other photos from the store - that's not the owner in the first photo: 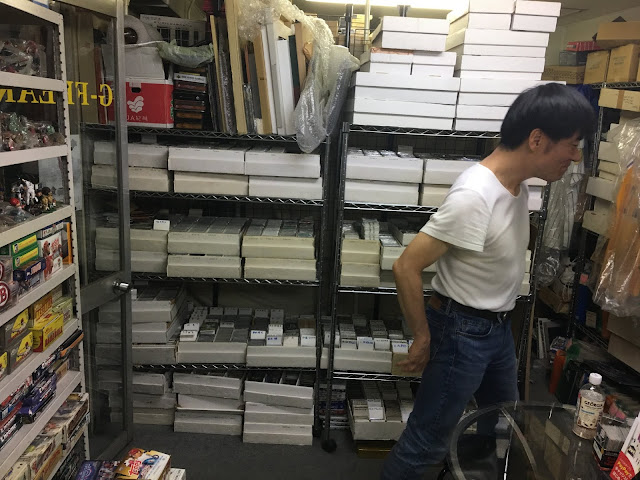 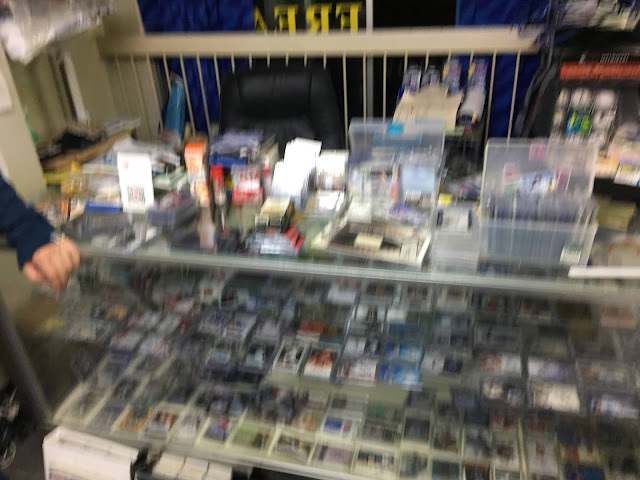 Sorry for the blurriness of the second photo.

It's funny - after the 2013 trip I liked Biblio much better than this store.  After this trip I like this store much more.

I don't know for sure but I have a feeling that this store does not take credit cards.

With this post I am finally done with posts about my trip.  It's taken me over 5 months to do it!
Posted by NPB Card Guy at 9:12 PM

I believe I went there with Ryan in January. Very tight and not much space to move around. cards were everywhere but the owner was a nice guy. And i believe you may be right about only paying with cash.

thank you so much!

thank you so much!

That was one heck of a tour! Thank you very much.

I tried to get to this location twice and I had to come back a third time to find it open. The stores got a lot of neat stuff at a very compact space. The shop owner was a pretty interesting character. He was by Japanese standards one of the friendliest store owners that I’ve come across. When I did get to his location it was at the end of the day and I didn’t want to keep him from closing but I did have a look at a few things I was able to pick up in Ichiro blue wave cart from 1999. I was also able to grab some Yumuri giants that I was looking for from the early 2000’s.

I am impressed that in a short period of time you were able to find specific cards that you were looking for. Someday I'm going to go back there when I have an entire afternoon to go through his boxes.