I've been categorizing most of the stores I went to in Japan as either "Mall Stores" with limited inventory, most of it recent or "Set Building Stores" that have inventory going back at least 15 years if not longer.  There were a couple stores I visited that don't fit into either of those categories - Biblio is the first one of those that I'm going to talk about. 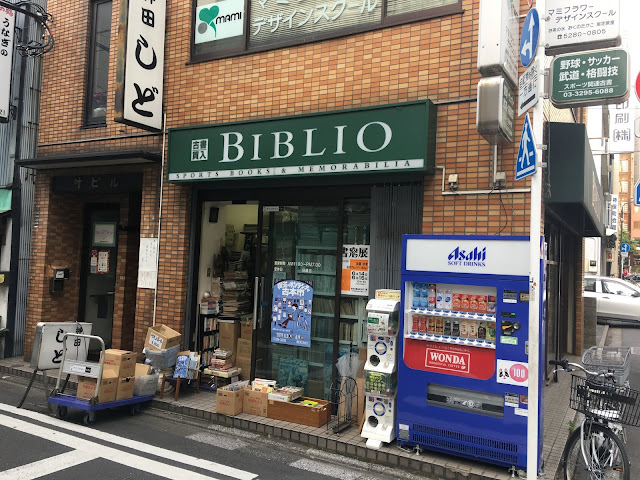 Biblio is located in Jinbocho, only about a tenth of a mile from Mint Kanda.  It is actually a used book store that specializes in sports books and memorabilia, especially baseball.  They carry baseball cards but it's unpredictable what they will have.  When I visited this store in 2013 they had a number of binders containing cards from the 1940's and 50's along with binders of Calbee cards from the 1970's and later and some boxes of other assorted cards.  This time I saw that they had a monster box containing 1970's Calbee cards and several boxes containing random BBM cards from the 1990's.  I discovered a box containing a near complete 1997 BBM set with the commons going for 60 yen apiece and I spent an hour or so going through it to nearly complete my set.  My notes for this visit say that I saw menko and bromides here but I don't remember it now. 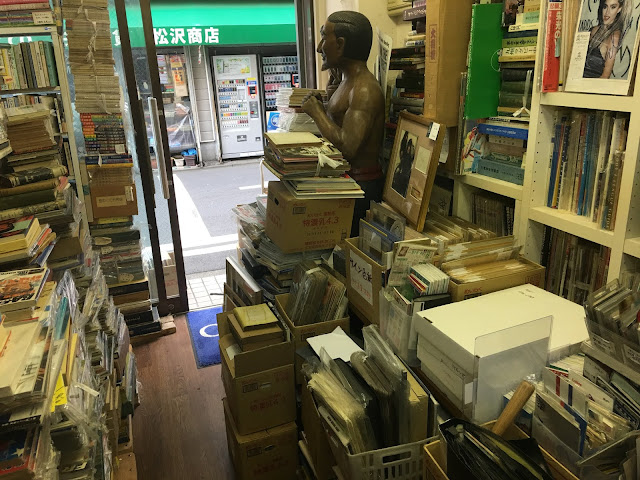 I fell in love with this store back in 2013 but I kind of fell out of love with it this trip.  First of all - it's next to impossible to move around in this store.  Back in 2013 it was kind of charming that they had some much stuff it was stacked on the floors.  This time around it was annoying.  I think the difference was in 2013 it was just Ryan and me in the store while this time around there were other customers.  The second is that some of their stuff is overpriced.  I felt like I got a good deal on the one Calbee card I bought from them but they'd priced the short printed cards from 1997 BBM set at 1580 yen which is probably 2 to 4 times more than they should have been.  I had gotten carried away with getting the 1997 cards so I overpaid for the short prints - that's my fault for getting carried away though - I'm not blaming them for that.  The third thing is that I think they did a somewhat underhanded thing to me.  I had gone through the box of 1997 BBM singles and pulled all but one card that I needed from the box.  I had given the stack of cards to the folks running the store (a man and a woman - the woman spoke English pretty well and I think she was the woman I had spoken to there back in 2013) and they were going through the cards to determine how much I owed them while I looked through the monster box of Calbees  (which can be seen on the lower right of my photo above).  It looks like they pulled some of the cards I had selected out of the stack of cards I gave them because when I went through the cards that evening I discovered I was short more cards that I expected.  I think they pulled some of the stars that they had priced at 60 yen each - I distinctly remember pulling the Norihiro Komada card from the box but it wasn't with the cards when I got home.  I had bought several hundred cards so it was difficult to notice a handful missing while I was at the store.  I don't think they charged me for the missing cards though but it was a pretty crummy thing to do to pull back cards that they'd had priced for sale without saying anything to me.

Oh, and I left my want list behind at the store!  I can't blame them for that but I was pretty irritated at myself.  You can see it in the middle of the above photo - it's the white piece of paper with the folded corner.  There's actually several pieces of paper there.  I had the list on-line as well so it wasn't a complete disaster losing the list but I had to spend some time updating the on-line version before I hit any stores again.

Ooooh. My trip to Tokyo is in two weeks and I had been thinking this and Mint Kanda would be the main contenders for my time (if I have some), but now I'm not sure. Reading about them simply removing cards from your pile like that, even if they didn't charge you, really makes me mad (as I'm sure it did to you!)

I mean once they've put them up for sale, and you've brought them to the counter to pay, the deal is done and except perhaps in the case of an egregious and obvious price tag error, they can't back out of it. Not even telling you they were doing that just makes it even worse!

The other stuff (crowded shop, etc) I could forgive, but that is a bridge too far.

As always check with Ryan but they're probably the store most likely to have the 70's and 80's Calbee cards that I assume you'll be looking for. Hitting them and Mint Kanda is probably still the best strategy.

I'm going to try to push to get all my card shop posts done before your Tokyo trip. Not just for you but it's been over five months since I returned from Japan - I need to move on!

Definitely shady removing cards from your stack.
I'm actually trying to get way from wantlists on paper, but sometimes they're quicker and more convenient than pulling them up on my phone.