Mint Yokohama is another store that has moved since I visited it in 2013.  It used to be located a couple blocks north of Yokohama Station on the second floor of a building above a Lawson's but now it's located on the eighth floor of Vivre shopping mall a few blocks to the southwest of the station.  UPDATE - It moved again as of May of 2021.  It is now on the seventh floor of the Marui City Yokohama shopping mall a little southeast of Yokohama Station.  Looks like the new location is a little closer to the train station than the Vivre location was.  The map at the bottom of this post has been updated for the new location. 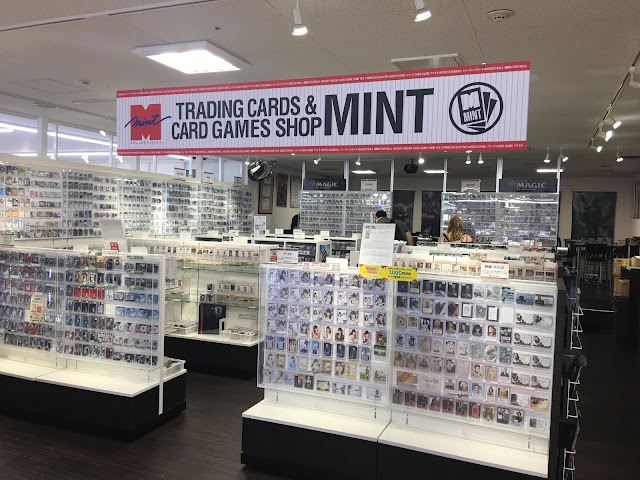 The store I visited in 2013 reminded me a lot of Mint Kanda - a small, run-of-the-mill card shop, well organized and selling singles, sets and unopened product.  If I recall correctly they had older cards although they didn't have anything I was particularly looking for that day.  Unfortunately they apparently got rid of their old inventory when they moved to their new location and are now basically a "mall store".   (Ryan's comment to me was that they "used to be so much better before they moved into the mall".)  Like the other "mall stores" I visited they basically had mostly new stuff in boxes, packs, singles and hits.  As you would expect from a store in Yokohama they emphasized the Baystars and I was able to pick up a number of team issued cards here.  I also got a couple Giants "Players Day" cards from 2008.  Dan was able to pick up the Lee Seung-Yuop card from the recent Epoch Lotte 50th Anniversary set here.

The store takes credit cards.  It was written up in Sports Card Magazine #117 published in May of 2016 - I think the article mentioned their then-recent move to the mall.

Like Mint Chiba I wouldn't necessarily recommend going out of your way to come by here but this store is much more conveniently located than that one.  Yokohama Stadium is just two stops away from the Yokohama Station on the JR Negishi line so you make a quick run to the store if you were on your way to a Baystars game.  It's also not far from other touristy things in Yokohama.

Here's a map showing the store's location.  NOTE - this has been updated to show the store's new location: