Jinbocho is a district in the Chiyoda Ward of Tokyo that is known for its collection of used book stores.  It also is home to three baseball card stores - Mint Kanda, Biblio and Wrappers.  If you are short on time to go to stores in Tokyo it's not a bad idea to hit these three (or at least Mint Kanda and Wrappers) as they are within a few blocks of each other.

The store I'm going to deal with in this post, Mint Kanda, technically isn't really in Jinbocho - it's about two blocks "outside" of the district and a couple blocks away from Meiji University.  It's conveniently located at street level. 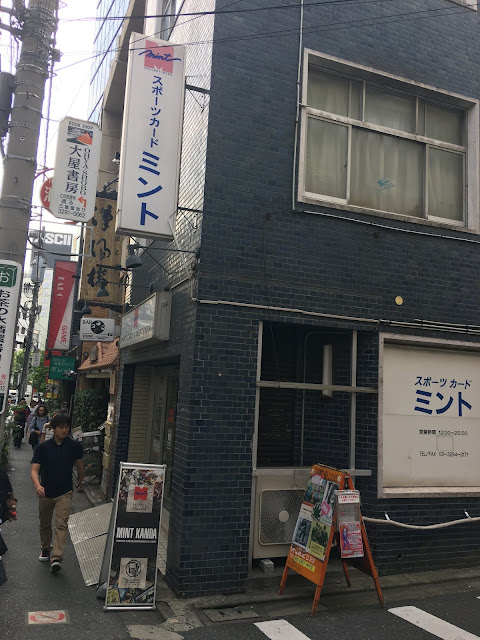 I feel like I always end up giving this store kind of short shrift.  It's actually a really good store but the two times I've visited in (both this time and in 2013) I had already felt like I had done the bulk of my set building at other shops and I didn't spent a whole lot of time in the store.  What I saw this time around was pretty much what I had seen in 2013 - they carry a lot of singles, especially for recent issues, and they are very well organized.  I felt they had a decent representation of BBM's issues and I did see older Calbee and Takara cards there are well although at this point I couldn't tell you how old.  This was the one store in Tokyo that I saw a lot of Giants team issued cards at although they may have been at other shops and I just didn't notice.

Here's a photo of the inside of the store: 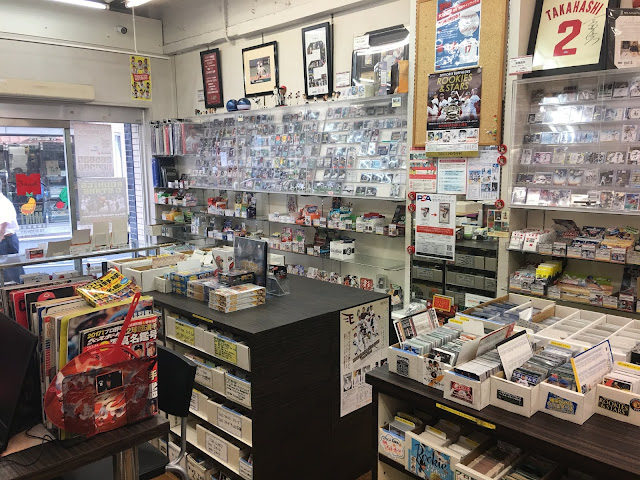 I ended up buying a bunch of Giants team issued cards here as well as a handful of 2019 BBM Time Travel 1979 singles for someone on Twitter.  I spent a total of 2450 yen - 950 yen of that was the nine 2019 singles.  The one drawback to doing set building here is that their "common" single prices are 100 yen a card, twice as much as they are at Quad Sports and some of the other stores.  They do take credit cards.

Here's a map showing their location:

A street level card shop in Japan. This seems like a rarity. And it actually looks like a traditional card shop that I grew up going into. Very cool.

Now that I'm thinking about it, only four of the 23 card shops I went to on my Japan trip (not including Mandarake) were "street level" - Biblio and Mints Ikebukuro, Kanda and Urawa. And the street level part of Mint Ikebukuro isn't the interesting part of the store, at least in my opinion. I haven't written about Biblio or Mint Urawa yet but I plan to soon.

The store has Calbee cards going back to 1973, though as with any shop, older Calbee (especially pre-2000) are hit-or-miss.