Card Of The Week November 10

The Opening Rounds of the 2019 Premier 12 were played last week and Samurai Japan ended up as the champion of Group B, having defeated Venezuela 8-4, Puerto Rico 4-0 and Taiwan 8-1.  Japan moves on to the Super Round this week, starting with a game against Australia tomorrow night at Chiba Marine Stadium.  Their biggest game will be the final game of the Super Round on Saturday night against Korea at the Tokyo Dome.

I expect to see a little more long ball in the games this week in Chiba and Tokyo Dome.  There were only four home runs hit in the six Group B games in Taiwan   Two of them were by Seiya Suzuki - the others were by Li Len of Taiwan and Herliss Rodriguez of Venezuela.  Suzuki leads the tournament with 9 RBI and is third in batting (among players with 10 or more at bats) with a .455 average.  His two home runs are tied with three players from Group A in Guadalajara where there was a lot more offense - Erik Kratz and Robert Dalbec of Team USA and Charlie Valerio of the Dominican Republic.

I was a little annoyed on Wednesday when Suzuki hit his first home run and the TV announcers said "Welcome to international baseball, Seiya Suzuki!"  Suzuki had appeared in five games in the 2017 World Baseball Classic and also had a grand slam against the Netherlands in a friendly match in November of 2016 so this isn't his first international rodeo.  Here's a "Primary Piece" card of Suzuki from the 2017 Topps Museum Collection set (#WBCPR-SS): 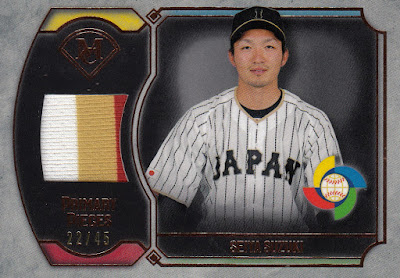