Saitama-city is a city just to the north of Tokyo-city, right over the border between the two namesake prefectures.  Urawa is a ward in Saitama-city that up until 2001 was itself a city and it's the location of most of the government offices for the city.  It doesn't have a lot of tourist attractions although it's the home to the Marine's farm team and there's a J-League team called the Urawa Red Diamonds although they play the bulk of their home games in a different ward of Saitama-city.  For baseball card collectors, however, there's another attraction - the Mint Urawa store.

The store is located at ground level about six blocks or so west of the JR Urawa station but you have to go down an alley to get to it - it's not on the street that you'll walk down from the station.  What you'll be looking for is a restaurant called (I think) Grand Blue: 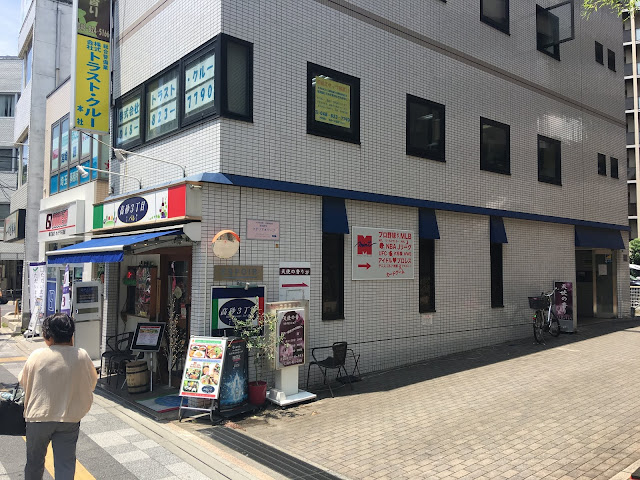 You'll want to turn right here and go down the alley.  You can see there's a sign for the store on the side wall of the cafe. 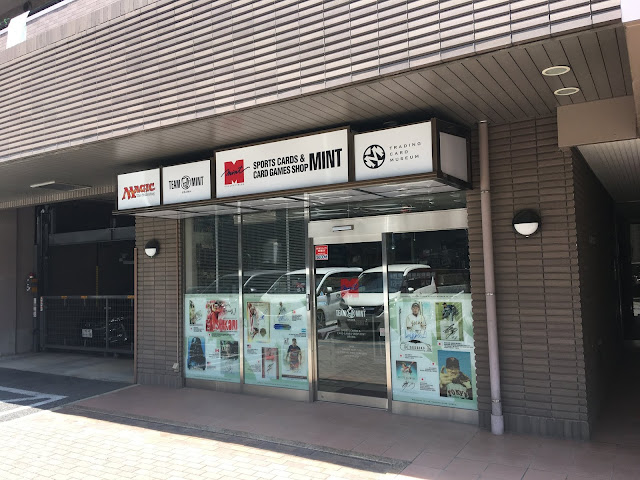 You might notice the sign that says "Trading Card Museum" - it's not a real museum as far as I can tell - it's apparently some sort of contest thing Mint runs where people show off the hits they pull from busting boxes or packs.  I don't recall seeing the sign at any other Mint stores I was at but I don't think Mint Urawa is the only store participating.

I liked this store quite a bit.  For a shop that didn't have a lot of space they appeared to have a pretty good inventory.  It was a pretty good store for set building as they had singles for BBM flagship going back to the 1990's although I would say the bulk of the cards were from 2002 and later.  They also carried a lot of recent stuff and a lot of complete sets.  Their prices on complete sets seem to be among the better one around - Ryan had told me that I should probably wait to get the then-new BBM Lions set here as they would probably have the best price on it.  I ended up not listening and picked it up at Mint Hakata for 1500 yen.  I would have saved 500 yen if I had waited and bought it here.  They have recent hits in binders and some older hits were sorted by player in boxes.

The guys working in the store were incredibly helpful.  I was looking to get a complete 2019 Epoch NPB set and had been rebuffed at every store I had asked about it at.  This store wasn't selling the complete set but they were selling the individual 36 card team sets for 1000 yen apiece so they suggested I put the set together that way.  I told them I didn't really want to spend 12000 yen on the set - I was hoping to do it for more like 7000 yen.  To my surprise, they agreed to my price.  We ran into a problem though - they didn't have team sets assembled for the Giants, Lions and Fighters.  They then proceeded to go through a bunch of singles and assemble the team sets while I waited.  They ended up being about 11 cards short so they gave me a list of the cards I was missing and knocked another 1000 yen off the price.  I ended up with 421 out of the 432 cards in the set for 6000 yen (and I picked up the other 11 cards in the next couple days for another 1000 yen).

In addition to the Epoch NPB set I picked up a bunch of singles (including some short prints) from the 1996 and 1997 BBM set (I had reconstructed my want list on-line after having left the paper one at Biblio a few days earlier).  All in all I spent about 9000 yen here.

One thing to keep in mind when set building here - the singles are organized by team, not card number.

Here's a couple photos from inside the store: 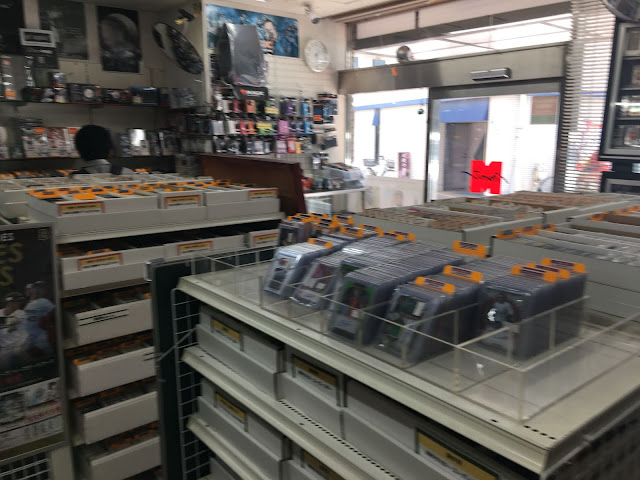 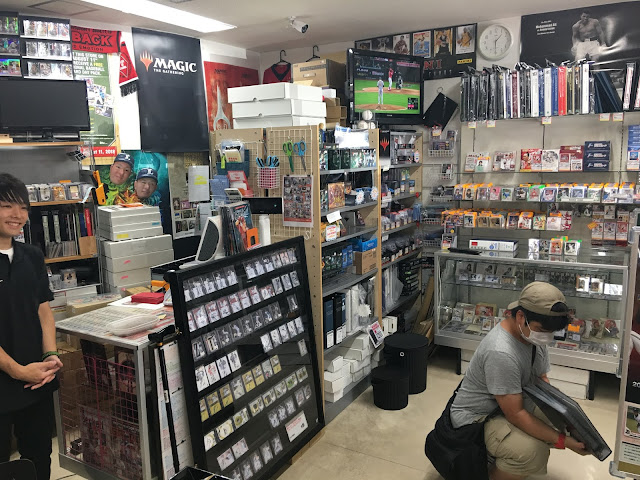 The only drawback to this store is that it's way out of the way.  It's around a 40 minute train ride from Tokyo Station to Urawa Station and then about a 10 minute walk to the store.   As I said there's not much in the way of tourist attractions nearby (although there's a couple art museums that aren't far away).  The store's really not that convenient to the Marine's farm team's field if you're trying to combine baseball card shopping with baseball game viewing - it's about a 30 minute walk to the ballpark from the store and Google's suggested public transportation routes all take about that long as well via buses and trains.  But if you have some extra time and want to hit a good card shop (and have already been to the good ones in Tokyo), this store is worth your time.

Here's a map showing the location of the store:

Nice to see the card shop employee with a smile on his face. I've visited 2 shops within the last 30 days and both employees looked like they hated their jobs.