I've written recently about several stores that are a bit of a haul away from central Tokyo.  This post is about two stores in the heart of Tokyo - Shibuya specifically.  The two stores are Mint Shibuya and Card Fanatic.

I will admit up front that I didn't spend a lot of time in either store.  I went to Shibuya on a Saturday night and it was packed with people.  I had low expectations for both stores and the crowds just made me want to check out the two stores quickly and then get out of the area.  So treat this post as more of a "here's where these stores are" post rather than a "here's what to expect at this store" post. 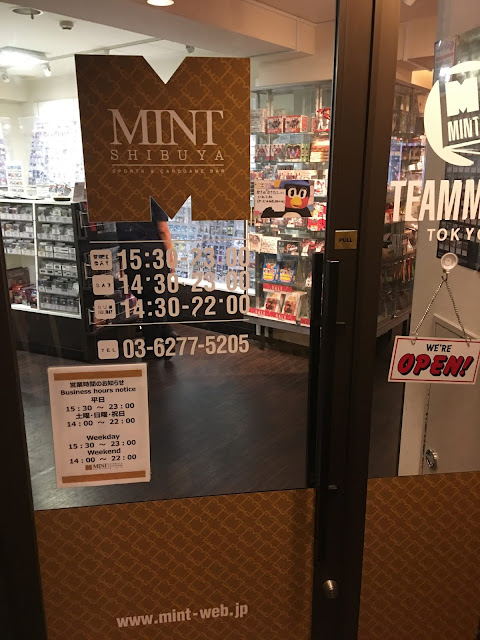 Mint Shibuya is located just west of Shibuya Station on Bunkamura Dori.  It's on the second floor of a building with a store called Mevius on the street level*.  It's basically an upscale "mall store" featuring mostly recent releases and hits.  It also has a large selection of gaming cards - especially Magic - The Gathering.  One unique feature of the store is that it contains a bar - so you can order a drink while you bust boxes or play trading card games.

The store takes credit cards.  I feel I should mention that this was the 14th and final Mint store that I visited in on this trip.

Card Fanatic is located on Meiji Dori to the south and east of Shibuya Station about a half mile from Mint Shibuya.  It is an area that is mercifully much less crowded than the area immediately around the station.  The store is located on the third floor of another building that features a Mevius store on the first floor: 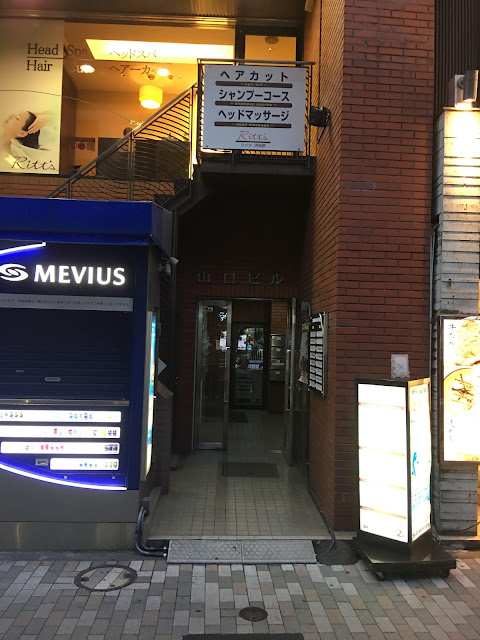 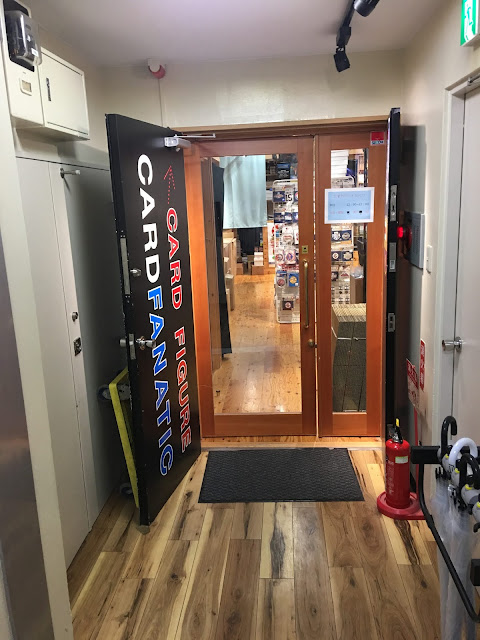 It's the larger of the two stores although it doesn't have a bar.  My impression was that the store carried more cards from the US than it did from Japan.  The store also seemed to be the only one I saw that carried memorabilia other than cards - they had figurines and autographed photos, balls and jerseys.  I don't think any of the memorabilia was for NPB players though - mostly NBA and European soccer stuff along with some Shohei Ohtani MLB items.  They take credit cards.

I've been quite curious about that Mint Shibuya since finding out they had a bar in it. Not sure if that is a positive point (nice to have a drink while buying cards) or a negative one (being in a store with drunk customers)....

For me personally Mint Shibuya was pretty overpriced and I never really bothered with much beyond a few stray packs and a Derek Jeter auto I bought as a single once. The most notable thing I can say about it is that it's across the street from a Taco Bell.

As for Fanatics, they lean heavily towards US/foreign cards (and nothing super old).

These stores kinda make sense if you only look at them as stores for box breakers (like BROG in Suidobashi) and only box breakers. If you go with the mindset of picking up singles or specific cards, you're going to have a bad time.

@Sean - I actually didn't even walk into the bar area - it was in a separate room where the tables for box busting/card playing were. I like a good beer but I don't think I want to be drinking when I'm opening packs - I'm a klutz so I'd worry too much about spilling something and ruining a good card and wasting a good beer.

@Zippy Zappy - Mint Shibuya had recent singles - there was a kid there with his dad (I assume) and he was looking for cards to finish some set that had just come out. But yeah, it's not a place where you're going to do much set building. Especially when the price for common singles is 100 yen a card.

Didn't see the Taco Bell - I think it's on the street behind the building, not Bunkamura Dori.

@Sean @NPB Card Guy - I went to the Mint store in Shibuya about 11 months ago. I bought a couple boxes of cards, but didn't rip it at the store. I did sit down and have a beer. I thought this was different and unique. Because my purchase was over $100USD, they gave me my first beer on the house, so how could I turn it down?

I am mainly interested in the Japan Baseball cards as I can get the North American stuff here any time I want. I am going back in just over 3 weeks, and will look to grab some of the 2019 EPOCH and BBM series cards to take back to North America.

I am looking to purchase boxes, so any advice where to get the cheapest boxes would be appreciated. Series 1 and 2 are my interests for both series.

That's really cool that you first beer was on the house. Pity Quad Sports doesn't have a bar in it - I spent over $100 the first time I was there on this trip and close to it the second time.

Really couldn't say who would have the best deals on boxes since I don't buy them. My gut feeling is that you'd probably get a better price at a shop a bit more off the beaten path - say Mint Urawa or Mint Odawara - rather than a shop in the major shopping areas - Mint Shibuya and Mint Shinjuku - but whether the amount you'd save would be worth the time and train fare it took to get to those stores is something I don't know. I will say folks have always spoken highly of Mint Kanda and it's in the center of Tokyo so it might be worth a shot.

Hope that helps. You might reach out to Ryan of This Card Is Cool for recommendations - I will always defer to his assessments of the shops since he goes to them all the time.

@NPB Card Guy, I will go back there this time and let you know what the minimum purchase was for a beer. Not much bigger than a draft glass...certainly not a pint...but I am not complaining. Standard Asahi beer...but refreshing.

Also, MINT gave me a punch card for when I made purchases, I can get the card stamped and then qualify for a free purchase or money toward a future purchase after a certain amount of punches.

I was talking with the workers, and asking about what sells for them and they said they are always interested in North American cards of the current Japanese players like Ohtani and Kikuchi...but less interested in the Hideo Nomo's, Hideki Irabu's of the world.