Got some sets in the mail last week, but I haven't had a chance to write about them until now (and then only because I'm home from work due to car repairs). First up is the BBM Lions Classic set. As I mentioned before, the Lions Classic is a series of home games for the Saitama Seibu Lions in which they wear throwback uniforms. Last year, the uniforms were for the 1960's Nishitetsu Lions. This year, the throwback theme is the 1980's Seibu Lions teams.

The Lions Classic set is a box set containing 27 cards - 13 cards of OB players from the 1980's (well, not completely OB as Kimiyasu Kudoh is in the set!), 13 cards of current Lions players in their throwback uniforms, and an insert card. I got an opened box (as usual), so I can't comment on the insert card.

The OB players included don't really have any surprises - Koji Akiyama, Hiromichi Ishige, Tsutomu Itoh, Kazuhiro Kiyohara and Kudoh are pretty obvious choices. The cards for the OB players have white, faded background that I don't like much, but maybe that's just me. Here's the card for current Lions manager Hisanobu Watanabe, back when he was a pitcher (card #11): 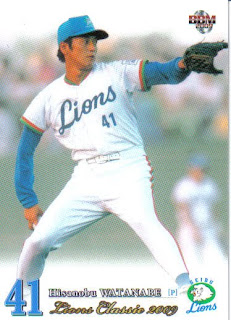 The cards for the current Lions players are borderless photos with a minimum of decoration, which I like a lot better. Here's the Takeya Nakamura card (#17): 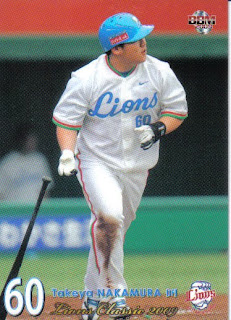 If you're a Lions fan, this is probably a set worth picking up. Otherwise, probably not.
Posted by NPB Card Guy at 11:14 AM