The History Of Uniform 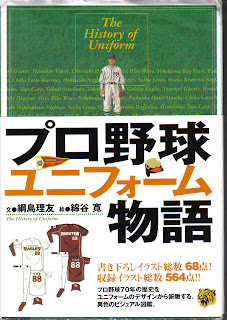 OK, I've been getting a bunch of questions about this thing I keep referencing called "The History Of Uniform". It is a book published in 2005 in Japan that shows the home and away uniform and cap designs for all NPB teams from 1934 to 2005, plus uniforms for All Star teams and other professional leagues (although none of the recent independent leagues). It's written in Japanese, but it's easy enough for a non-Japanese reader (such as myself) to understand enough to figure out whose uniform it is and from when.

Bill Ellis has done a little research on the book and passed it along in comments. I'll repeat the information he's related here.

I was wrong when I said that the book was published by BBM. It's copy-written by Ritomo Tsunashima and Hiroshi Watatani. I had originally ordered my copy in 2007 from YakyuShop, but I have not seen it offered there since then. Bill provided a link for the book on Amazon's Japanese website - I don't know about whether they will ship to the US or if you would need to go through someone like kuboTEN to get it.

I'm not aware of any website that contains the full information from the book. Bill has passed along what I assume is Ritomo Tsunashima's website which contains a couple of items from the book under the Uniform Story link.

If you have read this far, you now know everything that I know about the background of this book.

UPDATE - Bill Ellis passed on to me how he got his book - he had someone else order it and had it sent to a friend (of the ordering person) in Japan, who then sent it on to the States. I'm thinking that contacting kuboTEN would probably be the best way to go here for anyone without a friend in Japan to go.
Posted by NPB Card Guy at 9:24 PM

I see this book in bookstores all the time, but at 7500 yen or whatever, it is usually too pricey for me. I've kept an eye out for a cheap used copy but somehow have never seen one, go figure.

It is a great book though. I always enjoy looking through it. I can see how it'd be a big help for figuring out old cards.

Also, btw, Amazon.co.jp will ship to the US, won't it? It may be expensive, though.

I just spent a couple minutes looking at Amazon's Japanese site (through Google Translate) and it looks like they might ship this book overseas. There are some restrictions on what can be sent but I don't know if (or why) this book would be.

I am very interested in getting this book. Will the Yakyu Shop get more? Can Deanna find one for me? I will send her the money. Please advise. Thanks

I'd try either ordering directly from Amazon.co.jp or contacting kuboTEN to see if they can get it for you. As for getting YakyuShop or Deanna Rubin to get it for you, you'll need to ask them yourself.