Still catching up on some BBM sets from last fall...

The OB players include nine players who are still active but played in the US in 2010: Kosuke Fukudome, Kenshin Kawakami, Kei Igawa, Hiroki Kuroda, Ryota Igarashi, Akinori Iwamura, Hideki Matsui, Kazuo Matsui and Koji Uehara, plus Shingo Takatsu who I think was playing in Korea. (As an aside - I'd really like to know how BBM arrives at which MLB players get in the sets. Ichiro appeared in last year's Orix 20th Anniversary set and Daisuke Matsuzaka was in the recent Lions 60th Anniversary set, but neither appears here. Why?) The current players are about who you'd expect for each team. The bad thing about breaking the players up this way is that there's no "regular" card for Takuro Ishii - he's not OB so he doesn't show up with the OB Baystars and he's not a major enough player for the active Carp. Kimiyasu Kudoh falls into a similar situation. 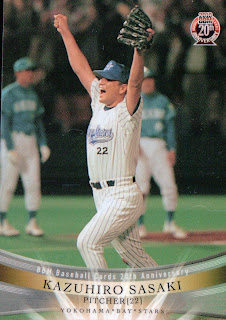 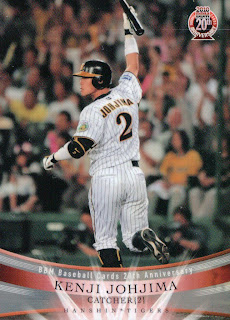 I think the photo on Sasaki's card is from the 1998 Nippon Series (given that there are Lions in the background).

One of the cool things about the set is that the back of each card features the player's rookie card. As you might expect, the 1991 set is represented quite a bit in the OB subset, but it looks to me that each one of all 20 possible years appear on at least one card, including 2009 (Tony Blanco) and 2010 (Masato Nakazawa). (I think there are only 1st Version sets represented for 2002-2010.) Here's the back of Kenji Johjima's card showing his 1995 rookie card: 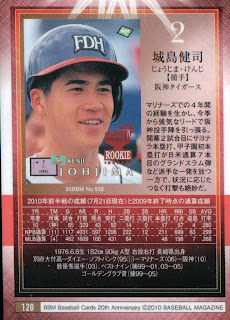 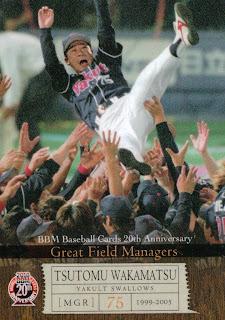 The "Great Records & Highlights" subset has kind of an odd breakdown of events. You'd think that given 27 cards to cover a 20 year stretch in baseball history that the events covered would be more or less evenly distributed. You'd be wrong. For the first 10 years covered, there's only seven cards, leaving 20 to cover from 2001 to 2010. I can't say I know enough to know what's missing, but I do think it's odd that it seems that everyone who reached 2000 hits since 1991 (Koji Akiyama, Kazuhiro Kiyohara, Atsuya Furuta, Kenjiro Nomura, Takuro Ishii, Yukio Tanaka, and Tomonori Maeda) got cards commemorating it in this subset except Norihiro Komada. And while Hiromi Makihara's perfect game in 1994 shows up, the Daisuke Yamai/Hitoki Iwase one to clinch the 2007 Nippon Series championship (first one for Chunichi since 1954) doesn't. But Satoru Komiyama's retirement ceremony does. Just kind of a weird mix. This is how BBM slipped a couple guys in (like Ishii and Kudoh) who didn't have "regular" cards in the set. Here's Takuro Ishii's card (#244): 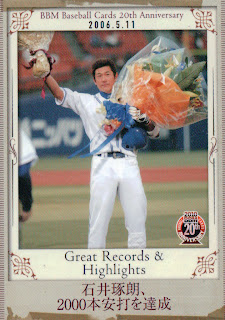