Been meaning to get to this for a while: Koichi Hori of the Chiba Lotte Marines retired back in December. There was supposed to be a retirement game for him a few weeks ago, but it got postponed by the earthquake (I think).

Hori was drafted by Lotte in 1987 when they were still the Orions. If I'm not mistaken, he was the last Lotte Orion still active (and the last former teammate of Choji Murata). Hori made the All Star team twice in his career (1995-96) and was named to one Best 9 team (2005) (which cover the three years in his career that he hit over .300). He appeared in one Nippon Series in 2005 when the Marines defeated the Tigers.

Hori's been around so long that his first hit and his first home run were against teams (Kintetsu Buffaloes and Orix Braves) that either don't exist or don't go by that name any more in stadiums (Kawasaki and Nishinomiya) that are no longer used.

I am fairly confident that this 1990 Takara card is his rookie card. This is definitely his first Takara card and I haven't found any Calbee cards for him from 1988-90: 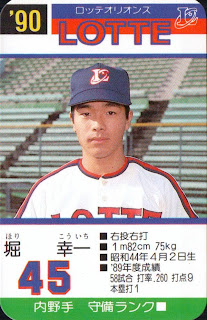 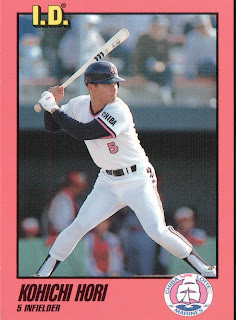 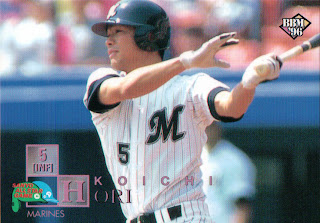 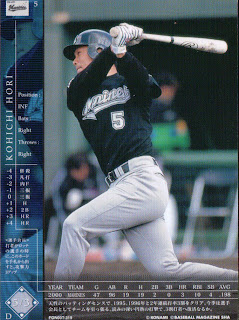 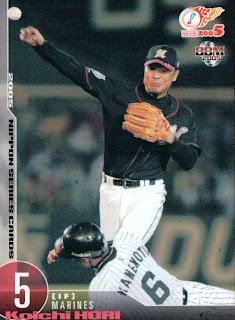 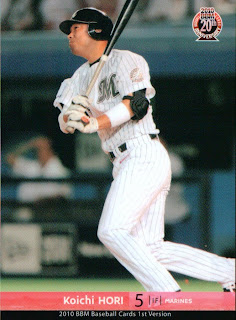 Actually, I'm fairly sure Kawasaki and Nishinomiya stadiums no longer exist too! (At least Nishinomiya, I am pretty sure of.)

Bobby once said he wanted to take Hori back with him to the Mets in 1995 but Lotte wouldn't let him go. Wouldn't that have been crazy? I kinda feel like Hori's almost along the same lines as Yukio Tanaka, where most current baseball fans have kinda forgotten how awesome he is unless they're fans of his team in particular. And he's one of the last of a dying breed in Japan -- guys who spent 20+ year careers with the same team. These days, if a guy is good enough to have a 20+ year career with the same team, he's probably going to try to defect to the majors or to other free agency to get a lot of money elsewhere instead. It's kind of sad.

I thought the ballparks might be gone, but I wasn't sure.

You know, I never did a Yukio Tanaka tribute post when he retired. I really should sometime.

I don't know about Hori and Tanaka being among a dying breed. There have never been that many guys ever, even before free agency. How many non-Giants can you think of who had a 20+ year career with one team before free agency? Off hand, I can only think of Choji Murata (man, I can't get away from him this week) and Sachio Kinugasa. Maybe Osamu Higashio. Katsuya Nomura, Isao Harimoto, Masaichi Kaneda, Hiromitsu Kadota and Hiromitsu Ochiai all played for multiple teams.

I feel like there have been a whole bunch of them to retire in the last few years. They might not all be 20+ years but many are awfully close -- Atsuya Furuta on the Swallows, Shinji Sasaoka on the Carp, Kazuyoshi Tatsunami on the Dragons, probably Shinjiro Hiyama of the Tigers in a year or two... hell, if the Baystars hadn't been retarded they should have had Takuro Ishii retire with them, as it is he played for them for almost 20 years too. And what about Masa Yamamoto, who is STILL playing for the Chunichi Dragons after 25 years?

And that's just off the top of my head :)

I've got to find some time to research this. You've got me curious now...