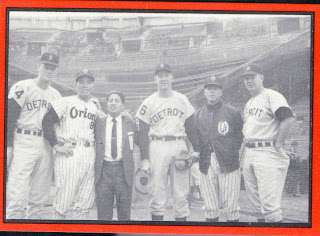 I picked this card up on eBay a couple of months ago. It appears to be from some sort of biographical card set for Detroit Tigers Hall Of Famer Al Kaline. This particular card (#24) shows a picture from the Tigers tour of Japan in 1962. From left to right is future US Senator Jim Bunning, Kazuhiro Yamauchi of the Daimai Orions, unknown, Kaline, unknown (might be Orions manager - Mitsuo Uno was manager in 1962, but he was replaced by Yasuya Honda for 1963 - don't know when in off season Honda replaced Uno - then again, could be someone else entirely) and Norm Cash. The Tigers tour was sponsored by the Mainichi newspaper chain which was one of the owners of the Orions at the time (the "Mai" portion of the name - Daiei was the "Dai" portion).
Posted by NPB Card Guy at 4:53 PM