A couple of months ago, however, while looking through the Yahoo Japan auctions for stuff to bid on through kuboTEN, I discovered that BBM had done a set.  They just had never listed in on their website.  The set, which I think is called Legend Players, was released in late 2009 and contains 100 cards of players whose careers span the 60 years.  The player selection is outstanding.  The set contains both OB and active players (including a few like Ichiro and Hideki Matsui who were active in the US at the time).  The OB players include the obvious like Sadaharu Oh, Shigeo Nagashima, Koji Yamamoto, etc but also a couple players who for whatever reason rarely appear in an OB set - Katsuya Nomura, Masaichi Kaneda and Choji Murata.  The set also includes a number of foreign players like Randy Bass, Tuffy Rhodes and Boomer Wells.  The active players include Norichicka Aoki, Yu Darvish, Hisashi Iwakuma and Masa Yamamoto.  I really think that if you were looking for one set to represent NPB history, this would be the set.  There's a couple guys missing (Wally Yonamine, Hideo Nomo, the Lee brothers, Warren Cromartie) but for the most part I think this is the most complete set of Japanese stars that BBM has ever done (with the possible exception of the 2000 20th Century Best 9 set).


In addition to the 100 regular cards, there were also 8 "special cards".  These cards feature new photos for eight players (Yutaka Enatsu, Isao Harimoto, Kazuhisa Inao, Hideki Matsui, Shigeo Nagashima, Sadaharu Oh, Tsutomu Wakamatsu and Koji Yamamoto) along with a gold facsimile autograph.  Since I don't know how this set was sold, I don't know if these were inserts in packs or simply a small bonus set.  Here's the Shigeo Nagashima card (#SP1): 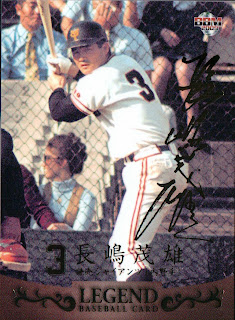