Card Of The Week December 29

The Yomiuri Giants have signed former Tampa Bay Ray farmhand Leslie Anderson to a one year deal for the 2014 season.  Anderson is from Cuba originally and defected in 2009. 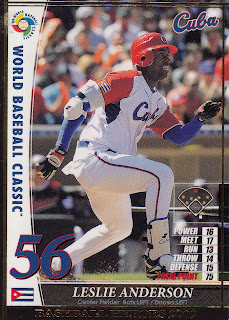 Konami did a beautiful set for the WBC that year, and they were really the ONLY company to do a fairly comprehensive set. Topps just focused on the MLB talent and popular stars from Japan, almost completely ignoring everyone else.

Yeah, that was probably the best WBC set anyone has done. I was really disappointed when I learned that Konami wouldn't be doing a set for the 2013 WBC.