Card Of The Week July 19

Hanshin's Shintaro Fujinami threw three perfect innings against the Pacific League in Friday's All Star game.   Fujinami came into the game in the fourth inning in relief of Tomoyuki Sugano with the CL down 4-2 but left with them up 7-2 (they held on to win 8-4).  Fujinami won both the game and the MVP, becoming the youngest player to ever win the game award.

And from what I was reading on Twitter on Saturday, his aggressive third base coaching contributed to the CL winning the second All Star game by a score of 8-3.

Here's a card of Fujinami from the 2013 BBM Tigers set.  That set had a six card "Fujinami Special" insert set featuring highlights of Fujinami's first season (or really first couple months).  Here's one of the cards (#FS5) commemorating something that happened on May 5, 2013 - not sure what, as the back of the card indicates that the Swallows won the game 7-5.: 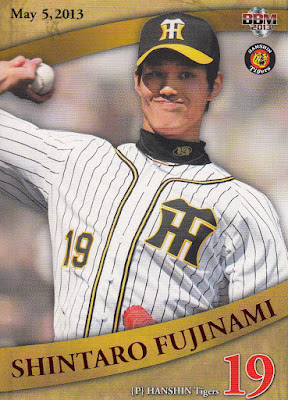 Just watched him pitch a complete game shutout against the Baystars last night. A very good month for him!