Card Of The Week April 3

One of the interesting aspects of Pacific League TV is that they have some coverage of farm team games.  While it looks like in the past they've carried Fighters ni-gun games from Kamagaya, all I've seen so far this year had either been Lions games from Seibu #2 Stadium (right next door to Seibu Dome) and Hawks games from their new farm team ballpark in Chikugo.  Since most of these games start at 1 PM in Japan which would be midnight here on the East Coast of the US, I'm not watching these games live but I've been trying to at least catch the highlights (which admittedly I'll probably stop once the novelty wears off).

One of the games from last week featured Nao Higashihama on the mound for the Hawks.  Higashihama was a first round pick for the Hawks out of Asia University back in the fall of 2012 (he was actually selected by three teams - the Hawks, the Lions and the Baystars but Softbank won his rights in the lottery).  This is the same round that Shohei Ohtani, Shintaro Fujitani and Tomoyuki Sugano were taken in.  My impression is that Softbank expected great things from Higashihama but it hasn't exactly happened that way.  After three seasons, he has a 6-5 record with the ichi-gun Hawks and a career ERA of 3.82.  His ERA has actually gone up a run each season - 2.83 in 2013, 3.82 in 2014 and 4.82 last year.  His ni-gun ERA's have done the opposite - 3.30 in 2013, 2.11 in 2014 and 2.05 in 2015.  So far this year he's 1-0 with an 0.53 ERA in three starts.  I'm not sure if he's doing something wrong or if it's just difficult to break into a very deep Hawks rotation.

Here's a card of Higashihama from on of the team issued "Hawks Players Card" sets in 2014: 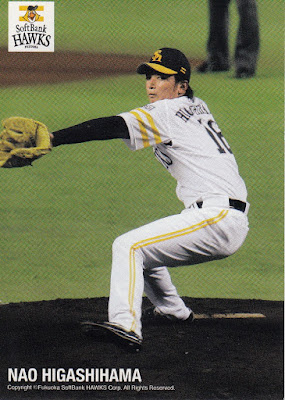