Card Of The Week April 16

I was rereading Bill Veeck's "The Hustler's Handbook" a few months ago and I cam across an interesting passage.  Veeck was in Tokyo in 1964 to broadcast one of the NPB All Star games for "Wide World Of Sports" and he mentions talking to Jim Marshall of the Dragons:

Jim Marshall told me that the only real adjustment an American player has to make upon coming to Japan is in his thinking.  American hitters are all guess hitters (and I would suppose Japanese hitters are too).  The Oriental mind may not be inscrutable to other Orientals but the Japanese pitcher's patterns are entirely different than those our hitters are used to.
"They get you three-and-nothing," Jim Marshall told me, "and you automatically look for a fast ball.  Not in this league, though.  You're just as liable to get three curve balls in a row.  They'll throw you the good breaking stuff and even change speed on you, and they'll get them all over, too" (p.224 of the 1989 "Fireside Edition")

If you've listened to John Gibson and Jim Allen's Japan Baseball Weekly podcast, this should sound familiar.  It seems like almost every hitter who comes to Japan and appears on the show expresses surprise that there are no fastball counts in NPB.  Here's proof that hitters have been talking about this for over 50 years - it's surprising that no one seems to have done their research before going to Japan. 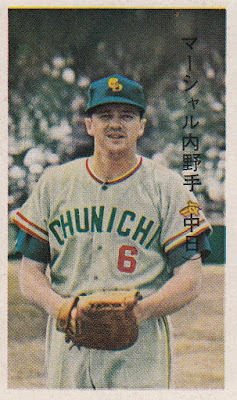 So what are the odds that I would do two consecutive posts containing cards of Jim Marshall?
Posted by NPB Card Guy at 8:22 PM

I just downloaded the podcast and will check it out!