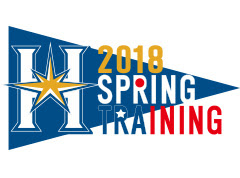 For the third year in a row the Hokkaido Nippon-Ham Fighters will be doing the early part of their spring training in Arizona.  After two years using the Padres' facilities in Peoria, however, the team has moved to Scottsdale to Salt River Fields at Talking Stick, the spring training home of the Diamondbacks and Rockies (not sure which team's facilities the Fighters will be using).  The team will be there from February 1st through the 14th.  Their schedule is here but the important days are the off days on the 4th and 9th, an inter-squad game on the 12th and two games against KBO teams on the 10th (KT Wiz) and 13th (LG Twins).  All three games will be at 12:30.

The roster of who's coming was published today.  I've translated it below (with a lot of help from YakyuDB).  Most of the Fighters' stars will be in Scottsdale as will their top draft pick from last fall - Kotaro Kiyomiya.

In addition to the Fighters there are four KBO teams that are also training in Arizona.  Two of them you already know - the KT Wiz and the LG Twins - since they will be playing the Fighers.  KT will be training in Tucson at the Kino Sports Complex from January 29th until February 21st.  Then they'll move to San Bernardino, California from February 22nd until March 10th.  LG is training somewhere in the Phoenix area (I couldn't figure out which ballpark) from January 30th to February 21st.  The other two teams are the Nexen Heroes who will be in Surprise from January 31st until February 19th and then in Tucson (at the Kino Sports Complex) from the 19th until March 6th and the NC Dinos who will be in Tucson (I think at Hi Corbett field) from January 30th until February 22nd and then Los Angeles from the 23rd to March 10th.

There's at least one other Asian baseball team training in Arizona this winter as well - the Chinatrust Brothers of the CPBL will be in Tucson although I'm not entirely sure when and where.  They're listed on the Kino Sports Complex's calendar on February 21st and then from February 28th to March 4th which doesn't make a lot of sense.  I don't know if they're spending time training over at Hi Corbett field also or if the schedule is just wrong.

Another KBO team, the SK Wyverns, will be training in Vero Beach, Florida from January 30th to February 22nd.

I want to thank MyKBO.net with the information on where the KBO teams will be training and Justin for the heads up on the Chinatrust Brothers.  I tried looking for information on the websites for the teams but I didn't find anything.

UPDATE - I was informed by @GOCPBL on Twitter that Chinatrust will be in Tucson for three weeks and they will likely be at Kino the entire time which makes more sense.
Posted by NPB Card Guy at 8:37 PM

I'm curious on how Brandon Laird will do. I hope he has another great season!