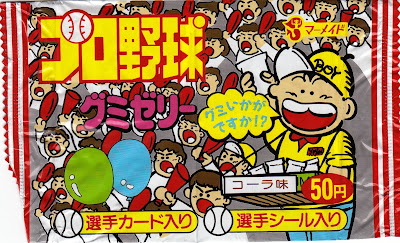 In 1989 a candy company called Mermaid (at least that'd be my best guess here) issued a set of baseball cards.  The set featured 50 cards in total - 10 cards for each of the Central League teams except the Swallows.  Each pack (the wrapper of which is seen above) contained one card and one sticker along with a couple pieces of candy.

Here's what the card backs look like.  You can see why they're called "Data" cards:

The accompanying "stickers" are much smaller - they're squares that are about two inches on a side - and are really decals rather than stickers.  They are essentially a parallel issue to the cards as they appear to have the same checklist - I say appear because Engel doesn't actually include the sticker checklist but the 19 I have match the numbers of the cards (and like the cards I only have stickers between 1 and 25).  The best part of the stickers is that instead of photos they have caricatures of the players instead.  Here's some examples:

The Mermaid Data cards were only issued that one year.  I don't know any more background on these - why they only did cards for those five teams, why they stopped making them, etc.  I don't even know if the company is still in business.  But they are a nice looking set of cards and an entertaining set of decals.
Posted by NPB Card Guy at 8:40 PM

Wow, cool find, I've never seen those before nor even heard of "Mermaid". I'm going to have to keep an eye out for them now!

Interestingly, they have a Gu-Choki-Pa picture on the back. Looks very similar to the menko of old.

Those caricatures stickers are fantastic! Never seen them before.

@SumoMenkoMan - I meant to mention that but I forgot. There have been a couple non-menko sets to feature them including the Nippon-Ham cards from the 70's.