Card Of The Week December 5

I was doing some preliminary research recently to get ready to do Yuki Saitoh's retirement post and I discovered something kind of interesting.  Jim Allen actually alluded to this in a recent Japan Baseball Weekly podcast so if you listened to the podcast (and you really should listen to that podcast) you already know what happened but if you didn't, this'll be new to you.

One of the oddities of the NPB draft is that, for the first round at least, a player can be selected by more than one team.  They have a lottery to determine which team gets his rights and whoever doesn't end up with the player gets to pick another player.  It's possible that multiple teams can select the same player with their secondary selection and have to go to a lottery again to determine who gets the player's rights.  This continues until all 12 teams have exclusive rights to 12 different players and then the rest of the draft commences which each player only being selected by a single team, the same way the MLB draft operates.

So let's look at the 2010 NPB draft and see how this worked in practice.  In the first round, Yuki Saitoh was selected by four different teams - the Swallows, the Fighters, the Marines and the Hawks.  Saitoh actually was not the player selected by the most teams that year - his Waseda University teammate Tatsuya Ohishi was picked by six teams - the Baystars, the Eagles, the Carp, the Buffaloes, the Tigers and the Lions.  (I believe the most teams to ever select the same player in the draft was eight for Hideo Nomo in the 1989 draft.)  The Fighters and the Lions won the lotteries for Saitoh and Ohishi respecitvely and the other eight teams had to pick again (the Giants and Dragons had no competition for their picks - Hirokazu Sawamura and Yudai Ohno).  The Swallows and Eagles both picked Takahiro Shiomi while the Buffaloes and Marines both selected Shota Ishimine.  The Eagles and Marines won their lotteries and the Buffaloes and Swallows had to make another selection.  They both picked a high school infielder named Tetsuto Yamada and the Swallows won the lottery for him.  Orix finally completed the first round by selecting Shunta Gotoh, their fourth attempt to pick a player.

I've kind of buried the lede here but you probably figured out the interesting thing - Tetsuto Yamada, who's clearly the best player who was taken in the first round of the 2010 draft (if not the entire draft although second rounder Yuki Yanagita has a pretty good argument as well) was bypassed 20 times in the first round and was actually the THIRD choice of the Swallows.  It just goes to show that the NPB draft, like the MLB draft, is a crap-shoot. 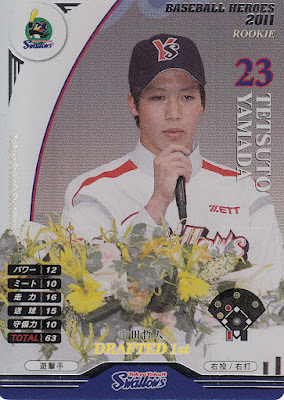