I've been cutting way back on my vintage card purchases the last couple years but I couldn't resist picking up a couple cards from Prestige Collectibles recently.  Robert had several cards from the 1968 Shonen Book set (JGA 152) up for sale on Ebay and two of them struck my fancy.

The set was included in the September, 1968 issue of Shonen Book magazine.  It contained 55 cards in total although only 13 of the cards were baseball players - I'm guessing the rest were other Japanese celebrities.  The complete set made up a deck of cards and I believe that the baseball cards were all the "diamonds" suit (which seems appropriate). 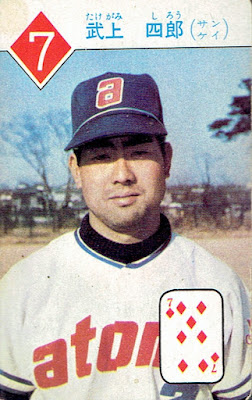 The first card I got was for Shiro Takegami of the Sankei Atoms.  Sankei bought the Kokutetsu Swallows in 1964 and renamed the team the Sankei Atoms in 1965 to try to capitalize on the popularity of the "Mighty Atom" anime series (known in the US as "Astro Boy").  You can just barely see the Mighty Atom on Takegami's left sleeve in this photo.  Sankei sold the team to Yakult in 1969 who retained the Atoms name until 1974 when they brought back the Swallows name.  I only have one other card depicting a Sankei Atom and coincidentally it's also of Takegami:

You can get somewhat better look at the Mighty Atom in this photo. 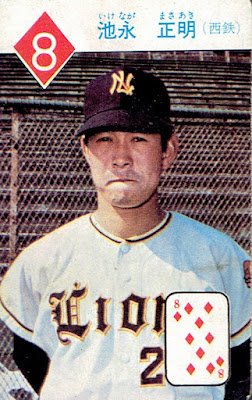 The other card is for Nishitetsu Lions pitcher Masaaki Ikenaga.  Ikenaga was a star pitcher for the Lions in the late 60's,  He signed with them out of high school in late 1964 and went 20-10 in 1965 to win the Pacific League Rookie Of The Year award.  He led the PL in wins with 23 in 1967 and had another 23 win season in 1968.  After his first five seasons, he was 23 years old and had won 99 games.  However, he would only win four more before his career came to end, but not, as you might expect, due to injury.  Ikenaga was implicated in the game fixing scandal known as the "Black Mist Scandal".  He had apparently been given 1 million yen by Chunichi Dragons pitcher (and former Lion) Tsutomu Tanaka to throw games.  Ikenaga claimed he hadn't done anything but he had kept the money and ended up being banned for life along with nine other players or coaches.

Ikenaga's career fell between the end of menko in 1964 and when Calbee started doing cards in 1973.  As a result he has very few baseball cards from when he was a player.  The only other card I know of besides this one is from the 1967 Kabaya-Leaf set.  (I should mention here that Engel erroneously identifies Ikenaga's card from the Shonen Book set as being Masaaki Nagaike.)

In 2005 NPB adopted a rule that allowed a banned player to petition for reinstatement.  I believe that Ikenaga is the only player banned for involvement with the "Black Mist Scandal" who has had their ban removed.  He threw out the first pitch at a Hawks game on May 11, 2005, a little more than two weeks after he was reinstated on April 25th of that year:

Cool looking cards. Oh man. How cool would it be to travel back to 1968 and pick up one of these magazines and a complete set?

Great choices of cards. I don't have any in my collection, but this makes me curious if there were any "Atoms" in the 1973 Calbee set.

@Sean - The 1973 Calbee set does not have any Yakult Atoms but there's a number of them in the 1973/74 set. I've picked up a couple of them from Mandarake the past few years - one for Hiromu Matsuoka and two different ones for Tsutomu Wakamatsu.

Cool, I have just added those to my want list!