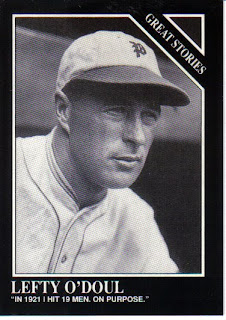 According to Baseball Reference's Bullpen, today is the 60th Anniversary of the completion of the San Francisco Seal's Asian tour of 1949, which included five games in Japan (Robert Whiting says it was 7 in "You Gotta Have Wa"). The Seals were managed by Frank "Lefty" O'Doul who had a major impact on the development of professional baseball in Japan. The Giants take their name and uniform colors from the New York Giants because that's the team that O'Doul was playing for during his visits to Japan in the early 1930's. The Seals tour was the first visit by a US team to Japan following the war (and at the time, the Pacific Coast League was practically a third major league). According to Rob Fitts' biography of Wally Yonamine: "The Japanese interpreted [the Seals'] presence as a sign of respect, which helped reestablish baseball's popularity after the war". O'Doul's contributions to Japanese baseball were recognized in 2002 by his election to the Japanese Baseball Hall Of Fame.

The Seals' tour was commemorated by several sets of baseball cards - a bromide set called "Yakyu Shonen Sepia Bottom Line Strip" and at least eight menko sets. The bromide set and one of the menko sets had been up for auction in the last Prestige Collectibles auction, so you can still see the pages for them for now.