The team that is now known as the Tokyo Yakult Swallows has an interesting history. It was born in 1950 as the Kokutetsu Swallows. In 1965, Kokutetsu sold the team to Sankei. The sale occurred during the season. As a result, the team that started the year as the Kokutetsu Swallows finished the year as the Sankei Swallows. Following that season, Sankei changed the name of the team to the Sankei Atoms, attempting to cash in on the popularity of the TV show Mighty Atom (aka Astro Boy). (The Atoms away uniforms from 1966 to 1970 featured Mighty Atom on their left sleeves.) In late 1968, Sankei sold the team to the Yakult company who fielded the team in 1969 as the Yakult Atoms. In 1974, the team changed their name back to the Swallows and in 2006 they added "Tokyo", despite the face that they had played in Tokyo since their beginning. The Swallows won their first Nippon Series in 1978 (in their first ever appearance) and had subsequent victories in 1993, 1995, 1997 and 2001 (along with a loss to the Lions in the 1992 Series).

So to celebrate the 40th Anniversary of Yakult's ownership of the Atoms/Swallows, BBM has released a 99 card anniversary set. This set follows the pattern that BBM has established over the last year - there's a six card "Victories" subset showing the five Nippon Series championships plus the 1992 Central League championship, a 61 card subset of former players, 26 cards for the 2009 team and a six card "Team Records Holder" subset.

As is customary, the former players include OB players (Tsutomo Wakamatsu, Atsuya Furuta, Katsuo Ohsugi, Takehiro Ikeyama, Tom O'Malley) as well as active players with other teams, be it NPB (Alex Ramirex, Kazuhisa Ishii), MLB (Akinori Iwamura) or other (Shingo Takatsu). Didn't see any really obvious players missing - might have been cool to have included Bob Horner, but he only spent one year in Japan. No cards of former managers were included (unless they played for the Swallows like Wakamatsu and Furuta), so the absence of Katsuya Nomura (who managed the team to three championships in the 1990's) isn't surprising (or unexpected, since he wasn't in the Hawks, Lions or Lotte anniversary sets either).

I guess my only disappointment with the set is that the only card showing someone in an Atoms uniform is Wakamatsu's. I think it would have been entertaining to have had a few others. 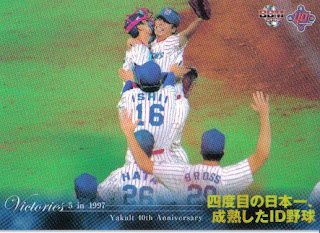 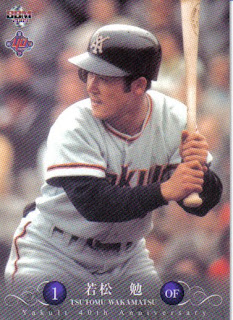 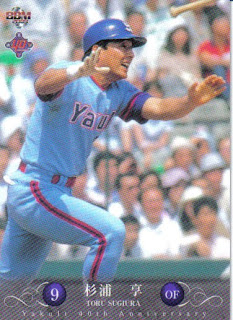 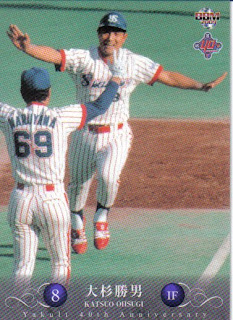 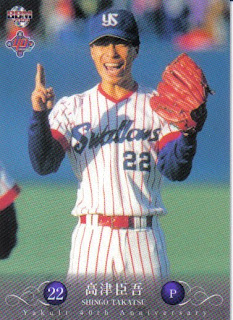 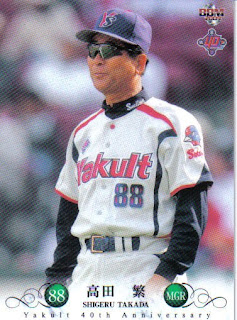 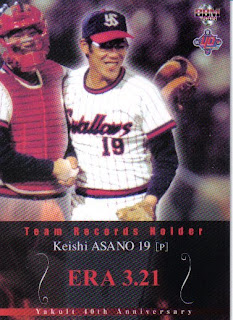