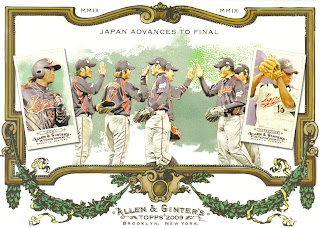 OK, maybe I'm being too optimistic here, but I'm guessing that Topps has finally finished making World Baseball Classic sets for the 2009 games. So here's a wrap up on what all they produced last year.

That's a total of 306 cards, not all of which were of Derek Jeter or Alex Rodriguez. (And that's not counting the two 8 card promo sheets given away at Pool A and C games in Tokyo and Toronto respectively.)

For the victorious Japanese team, there were 50 cards that represented 21 of the 29 players who saw action during the WBC (plus a patch card from the eTopps set). Here's a listing of the players on the roster and their cards (for the Allen & Ginter cards, each card gets counted twice since there are two player "cards" on each card):


This (obviously) does not include the cards Konami produced in Japan for the WBC. I suspect that they produced a complete team set for the Japanese team, but the cards are going for much more than I want to pay for them on eBay. 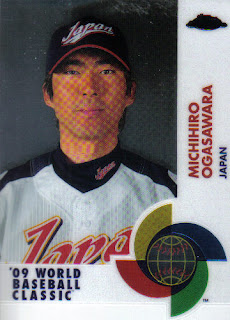 I'm just seeing this post now while searching for something else. I just uploaded the 2009 eTopps WBC World Baseball Classic checklist here: