BBM released a set last December to celebrate the Chunichi Dragons' 75th Anniversary. The set pretty much follows the standard pattern most of BBM's Anniversary sets have followed - there's a six card "History Of Dragons" subset, 75 cards for OB Dragons (which as usual means both retired players as well as active former Dragons) and 18 cards for the 2010 team.

Each of the six "History Of Dragons" cards covers an 11 to 13 year span in the team's history. The cards depict memorable events such as the 1954 and 2007 Nippon Series victories and the 1974 and 1988 Central League pennants.

BBM did a set to celebrate the Dragon's 70th Anniversary five years ago and, as you'd expect, there's a bunch of overlap with the OB players. In fact, there's at least one player (Shozo Eto) who has the same picture used in both sets. The previous set contained no gaijin in its OB players. This one has a number including Ken Macha, Gene Martin, Leo Gomez and Tyrone Woods. Again as is usual for the Anniversary sets, there seem to be more players from the 60's and 70's on than from earlier years, although there are several players from the 40's and 50's. The set also includes two players currently playing in the US - Kosuke Fukudome and Kenshin Kawakami. Most of the stars from Dragons' history are included - Michio Nishizawa, Shigeru Sugishita, Morimichi Takagi, Kenichi Yazawa, Kazuyoshi Tatsunami, Hiromitsui Ochiai and Shinichi Eto. The most prominent missing player is Senichi Hoshino, who was also missing from the 70th Anniversary set. He is however clearly visible on the "History Of Dragons" card for the 1974 Central League champs as well as findable on the card for the 1988 champs.

The 18 cards for the current team include Masa Yamamoto, Masahiko Morino, Kazuhiro Wada, Motonobu Tanishige and Hirokazu Ibata among others. The only card that really stood out to me was the one featuring Kazuki Yoshimi, as he is wearing a throwback uniform on it.

Now for some sample cards. Here's the "History Of Dragons" card for the 1974 Central League Champion Dragons (#04). That's Hoshino on the right (#20): 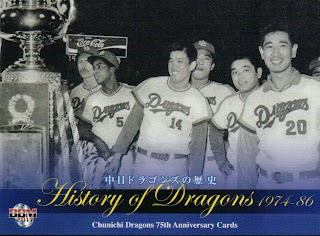 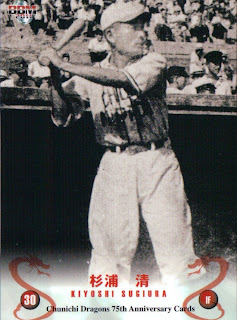 Tatsuhiko Kimata (#30). This is the same photo that the Epoch All Japan Baseball Foundation 1977 set uses for Kimata: 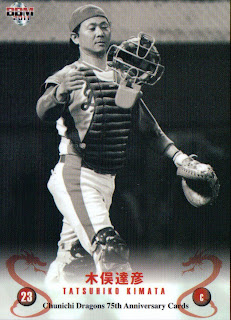 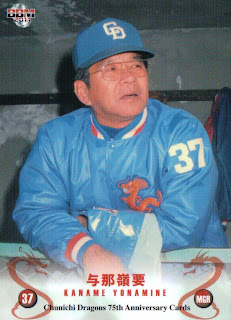 One of the interesting things with the OB cards is that they show a couple of the more obscure alternate uniforms worn by the Dragons over the years. Here's Shuhei Ichieda in a uniform from 1968 (#31): 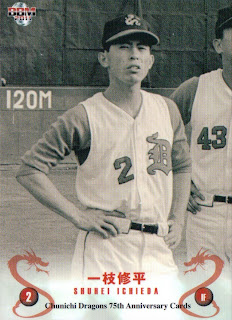 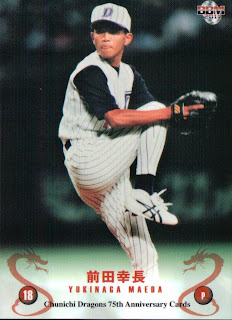 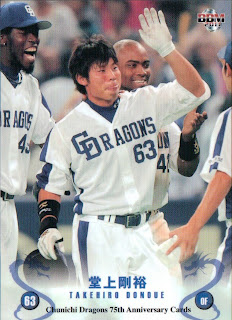 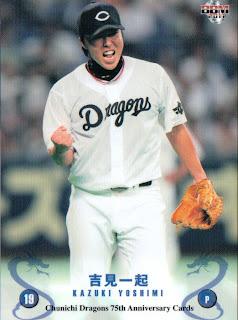