Late last year, Epoch and the All Japan Baseball Foundation put out their third set featuring OB players. As opposed to the first two sets, this set actually had a theme - the year 1977. All players are shown on their cards with their 1977 teams and based on the uniforms shown, each photo could plausibly have been taken in 1977.

I think that the set was issued as a box set with 64 cards - 63 "regular" cards plus an autographed card. As usual, I got an opened set, so I didn't get the autographed card. Of the 63 cards I did get, 52 of them are for individual players. There are also 10 cards featuring significant events in 1977 - 5 cards for Sadaharu Oh's 756th home run plus cards for Keishi Suzuki's 200th win, Tetsuya Yoneda's record 949th and final game, the pennant winners (Braves and Giants), and the Nippon Series winner (Braves). There's also a checklist card that shows the batting and ERA champs for each league.

The players in the set include most the major award winners for the year - Sadaharu Oh (CL MVP), Shigeru Kobayashi (Sawamura), Akio Saitoh (CL ROY) and Hisashi Yamada (PL MVP) but not the PL ROY Yoshinori Satoh. Koji Yamamoto, Shigeru Kinugasa, Isao Harimoto, Senichi Hoshino and Tsutomu Wakamatsu are some of the other players in the set.

I really like this set, but there are some significant players missing who made an impact in 1977. For one thing, there are no gaijin in the set, so Bobby Marcano (PL Best 9 2B), Leon Lee (PL Best 9 OF), Leron Lee (PL home run leader) and Charlie Manuel (42 home runs for the Swallows) aren't in the set. Yutaka Enatsu, Hiromitsu Kadota, Masayuki Kakefu and Yutaka Fukumoto are also notable exceptions along with (stop me if you've heard this one before) Katsuya Nomura and Choji Murata. Still, it's a nice little set and it's nice to see an OB set with a real theme. 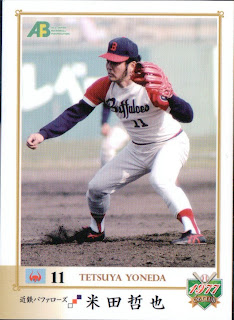 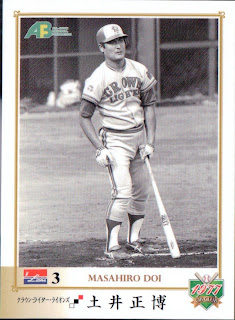 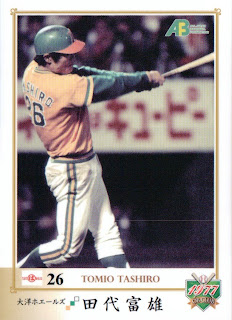 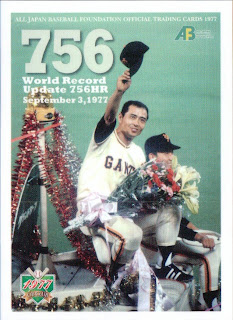 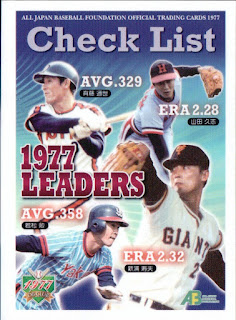 From top to bottom, that's the player cards for Tetsuya Yoneda (#52), Masahiro Doi (#40) and Tomio Tashiro (#10), one of the cards for Sadaharu Oh's 756th home run (#56) and the checklist/leader card (#63) featuring Michiyo Arito, Hisashi Yamada, Tsutomu Wakamatsu and Hisao Niura. (I hadn't realized until I gat this set that Yoneda had ended his career with the Buffaloes - I thought he'd played his entire career with Hankyu.)
Posted by NPB Card Guy at 9:12 PM