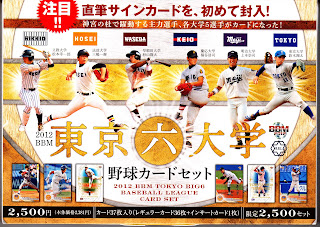 My 2012 BBM Tokyo Big Six Spring Version set showed up in the mail today from AmiAmi.  It's a 37 card box set featuring 36 "regular" cards and one special card.  As has been fairly standard the past few years, the 36 "regular" cards are split evenly between all six teams - each team has a team card and five player cards.  As usual, the photography is very nice.  Here's a couple examples (I'm trying something new with my scanner, so the images are a little more washed out than they should be):

The "special" card included in the set is either one of six possible "Tokyo Big Six Heroes" insert cards or an autographed version of one of the 30 player cards.  I lucked out and pulled an autographed Hiroshi Taki card (#21): 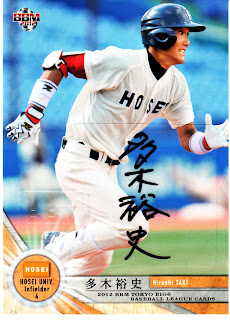 Each of the autographed player cards is serially numbered to 30 with the exception of Taki and Yuhei TakahashiTakanashi of Waseda - their cards are only numbered to 29.

All the regular cards can be seen here.
Posted by NPB Card Guy at 8:43 PM

Dude, I got an autographed Ryosuke Itoh. I would be much happier about this if I didn't already have Itoh's autograph and a photo with him. Same for Taki honestly, I've got 2 photos with him and like 3 autographs -- I even sent him a birthday card this past week. Though there's a good chance he'll get drafted this year, certainly... it would have been exciting to get someone from the still-obnoxiously-elusive Waseda, or one of the other specials.

BTW, it's Takanashi not Takahashi :)

Hmm, there's 28 players with 30 autographed cards each and 2 players with 29 autographed card each. That's 898 possible autograph cards in all in a print run of 2500 sets (the sets are serially numbered). So there's almost a 36% chance of pulling an autograph from the set - I wonder how that stacks up with some of the other sets.