For the the first time, the Late Series card were for two teams rather than one.  The Marines introduced a black alternate jersey - all the Late Series Marines cards featured them wearing it:

The Tigers home uniforms had featured white, pinstriped hats since 1979.  For the 2000 season, they replaced them with solid black hats - again, all the Late Series Tigers cards featured them wearing it:


It looks like there was another corrected card, but I don't know what the error in the original card was.  Seigo Fujishima's card was replaced in the Late Series for some reason.  I have no idea why - this is not mentioned in the write up of the set in Gary Engel's Checklist.  I won't swear that this is the only card like this but it's the only one I've seen.

Giants manager Shigeo Nagashima had worn #3 during his playing days.  During his first stint as Giants manager in the late 1970's he wore #90.  When he resumed that job again in 1993, he started wearing uniform #33.  When the Giants wooed free agent Akira Etoh from the Carp following the 1999 season, they apparently worked out a deal where Nagashima would resume wearing #3 so that Etoh could continue wearing #33 as he had in Hiroshima.  For some reason (probably to have an excuse to do a five card subset for Nagashima), BBM felt this was worth commemorating.  The five card "Comeback #3" subset features two cards of Nagashima as a player wearing #3 and one card each of him as manager wearing #90, #33 and #3.

For the first time, BBM added an insert set for the previous year's Golden Glove winners.  This would remain a standard insert set for BBM until 2011 when it (and the Best 9 insert set) became subsets in the 1st Version set.  Like the Best 9 subset, there were two versions available - the "regular" version with a gold glitter background and a mail-in contest version without the background.

2000 marked BBM's 10th Anniversary.  To commemorate this, BBM issued an insert set of reprints of rookie cards for one significant player for each of the 12 teams - Kenji Johjima, Kazuo Matsui, Ichiro, Tomohiro Kuroki, Yukio Tanaka, Norihiro Nakamura, Kazuyoshi Tatsunami, Hideki Matsui, Takashi Saitoh, Atsuya Furuta, Tomonori Maeda and Tsuyoshi Shinjyo.  Any reprints of cards from 1994 or earlier are the same smaller size that the original card was.

BBM did one additional insert set - the 1990's Best 9.  These were plastic coated cards that featured the Best 9 team for the 1990's - Masaki Saitoh, Atsuya Furuta, Kazuhiro Kiyohara, Bobby Rose, Akira Etoh, Kazuo Matsui, Ichiro, Hideki Matsui and Takanori Suzuki.  I have none of these to display.  I also do not have either of the available memorabilia cards - jersey cards for the two 1999 league MVPs - Shigeki Noguchi and Kimiyasu Kudoh. 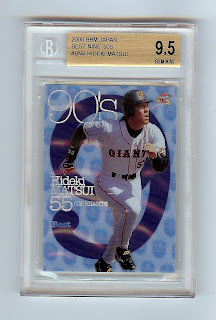 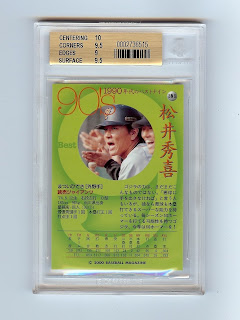 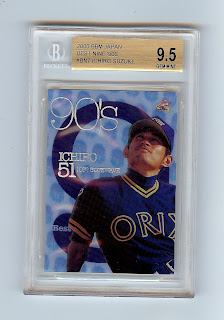 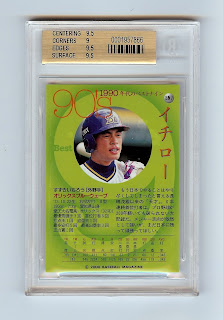 BBM included a poster but not an information sheet with the boxes.  (It's possible that there was an informations sheet but I didn't keep it for some reason.  Not sure why I wouldn't have when I've saved them for everything else though.)  The poster is too big for my scanner but I took a picture of it:

Wasn't the correction 99 Readers vs 99 Leaders ... they replaced the R with a L

Yes. I'm sorry if I did not make that clear. The cards in the subset showing the 1999 Award winners and Statistical Leaders originally were labeled "'99 Readers" and were corrected in the Late Series cards to be "'99 Leaders"

I love this set. I purchased a box not that long ago and got every notable player except the two best cards - Iwakuma and Ichiro. I have terrible luck with boxes.