Card Of The Week September 9

I left home a little later than normal (around 7:45-ish) last Wednesday and so I was able to see the end of the Lions-Hawks game on Justin.tv.  The game had been tied 1-1 going into the bottom of the ninth when Shogo Akiyama hit the only pitch thrown in the game by Hawks reliever Akihiro Yanase for a walk-off home run.  Here's Akiyama's 2012 Calbee card (#18): 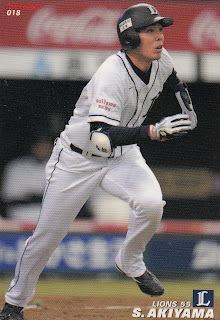 The thing that struck me as kind of odd while watching the TV coverage between the time Akiyama crossed the plate and when his "Hero Of The Game" interview took place, you could hear "Daydream Believer" by the Monkees playing on the PA system at the Seibu Dome.  I don't know why, but it just struck me as kind of surreal to hear a 45 year old Monkees song playing in Japanese ballpark.

I'm curious who programs the music at Seibu Dome because earlier this season while John Gibson was recording either one of his interviews or one of his Japan Baseball Weekly podcasts at the park, I heard "Tessie" by the Dropkick Murphys (which as a Red Sox fan is one of my favorite songs of all time).  Again, very odd.  Is it normal for American rock songs to be played on the PA systems at Japanese parks?