Card Of The Week December 2

Just finished reading Ralph Pearce's book "From Asahi To Zebras:  Japanese American Baseball in San Jose, California".  It's an interesting book about the history of baseball in the Japanese American community in San Jose (which you probably figured out from the title) from the 1910's through the early 1960's (and actually some community youth programs later than that as well).  Mush of the book focuses on the San Jose Asahi team in the years prior to World War II, especially spotlighting their tour of Japan in the mid 1920's and their games against the Tokyo Giants during the Giants tours of the US in 1935 and 1936 (the Asahi was one of only two Nisei teams to defeat the Giants during the 1935 tour).  The section of the book dealing with the post war era concentrates on the Zebras, who basically replaced the Asahi as the preeminent team in the Japanese American community in San Jose.

One of the Zebra's primary rivals in the Northern California Nisei Baseball League (NCNBL) was the Fresno Nisei.  A couple of the players on the Fresno team eventually played for the Carp in the mid-1950's.  The most successful of these players was an outfielder named Satoshi "Fibber" Hirayama who would spend 10 years with Hiroshima from 1955 to 1964.  Hirayama was the subject of an article in the August 4, 1958 issue of Sports Illustrated written by Mark Harris, author of the great Henry Wiggen baseball novels (of which the most famous is "Bang The Drum Slowly", made into one of the best baseball movies ever).  He's also one of the subjects of Rob Fitts' "Remembering Japanese Baseball".

I was kind of surprised to realize that Hirayama hasn't appeared in any of BBM's OB sets, especially the Carp's 60th Anniversary set from a few years ago.  I'm actually not positive I have a card of him or not.  This card is from the 1959 "2 in 1" Marukami B & W set (JBR 5): 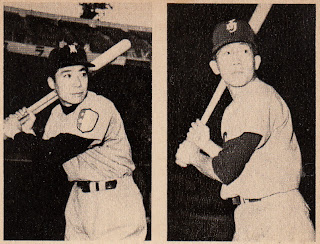 The listing for the set in Gary Engel's "Japanese Baseball Card Checklist And Price Guide" says that the player on the left is an unknown player for the Orions.  The player on the right could either be Hirayama (described in Engel as "RHB - hips up") or Takeshi Koba ("RHB - thighs up").  I'm going with Hirayama, but it could be Koba.  (And now you see the kind of issues that you run into trying to identify old bromide cards, even when you have a checklist.)

(And in case you're curious, the other two members of the Fresno Nisei to play for the Carp were Kenso and Kenshi Zenimura, sons of Kenichi Zenimura who was known as the "Father Of Japanese American Baseball".)

Thanks for the plug! Hope you enjoyed the book, it was a lot of fun to write. Your card sure looks like Hirayama to me.