Got a nice surprise a few weeks back when I got my latest shipment of cards from Japan.  The fellow that I get my cards from slipped an issue of Sports Card Magazine into the package.  This is a magazine published by BBM that covers sports cards in Japan - essentially the Beckett of Japan.  It has checklists and price guides for the latest releases for BBM, Calbee and Epoch/All Japan Baseball Foundation.  Obviously, it's all in Japanese so it's of limited usefulness to a Japanese illiterate like myself, but the pictures are nice. 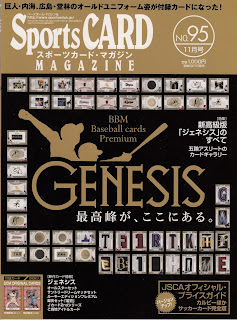 I've gotten issues of this magazine before, but what made this particular issue so special to me is that it still had baseball cards in it.  BBM distributes promo baseball cards in this magazine - I don't know if it is every issue and I don't know how many they normally include.  Every other issue I've gotten I've bought on eBay and any promo cards were already removed from the magazine.  This issue contained two promos for BBM's new high-end Genesis set (which replaced Touch The Game which in turn had replaced Diamond Heroes back in 2002):


(Note: the Utsumi card has a red border all the way around it but my scanner decided to ignore it)

The one thing I found really cool about these cards is that they aren't just promo versions of the regular cards - they are a special parallel version.  At the end of August, the Central League teams ran a promotion called "Great Central" where all six teams wore retro uniforms for a couple of series.  These cards are labelled as the "Great Central Edition" as both Utsumi and Dohbayashi are wearing 70's era uniforms.  These are not the pictures on their regular cards (which can be seen courtesy of Jambalaya here and here).  The red border is also different than the original cards although there appears to be a red bordered parallel (as well as a blue bordered one and a green bordered one).  I don't know if there are any other "Great Central Edition" versions available - I think these are the only cards given away with the magazine (as the cards are pictured on the front cover) but I don't know if any other promo cards were given away in some other manner.

I am generally not a fan of the "high-end" card sets - I really never liked Topps Finest or Upper Deck SP and I generally have found BBM's high end offerings of Diamond Heroes and Touch The Game to be extremely unattractive - but I did briefly consider picking up Genesis so that I could complete the "Cross-Blaze" crossover subset.  I ultimately decided that it wasn't worth it enough to me to spend the money on the set.  While it was fun to get these promo cards, they didn't make me change my mind.