There was an interesting question posed on one of the Japanese Baseball forums the other day - Why do Japanese uniforms have English letters rather than Japanese characters?  Michael Westbay suggested that it had something to do with a backlash against the "Imperial Charter" that forbid the use of English on baseball uniforms during the war.  I think it's a bit more complicated than that.  I wrote a response to Mr. Westbay's comment but I don't know if he'll publish it or not.  I'll repeat what I wrote here and illustrate it as well.

The first professional baseball team in Japan was founded in late 1934 and called the "Dai Nippon Tokyo Yakyu Kurabu" (the great Japan Tokyo baseball club).  According to "Taking In A Game:  A History Of Baseball In Asia" by Joseph A. Reaves, the founder of the team, Matsutaro Shoriki, "outfitted his team in natty uniforms emblazoned with kanji characters instead of Western numbers".  Here's a card showing Eiji Sawamura wearing this uniform:

I swiped this picture from "The History Of Uniform" as it shows the kanji numbers on the uniform backs (I could have swiped more images from that book but this is a baseball card blog after all...): 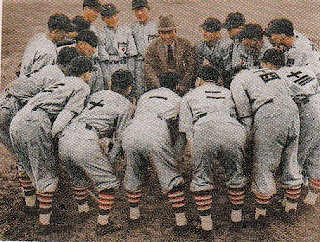 The team spend the 1935 season barnstorming in the US.  They were fairly successful, winning 93 of 102 games against semi-pro and Pacific Coast League teams.  According to Reaves - "The only minor drawbacks to the team's popularity in the States were their kanji characters and their cumbersome Japanese name.  They rectified both by renaming themselves the Tokyo Giants and adopting a uniform identical to the New York Giants..."

So it would appear that the first professional team in Japan adopted an English name and used English on their uniform to become more popular during their tour of the US.  I'm going to make a couple assumptions here - the Giants decided to keep the name when they returned to Japan because they had been successful with it in the US and the other teams in the Japanese Professional League that started in 1936 adopted English names with English uniforms because the Giants had done it.  I don't know if that's really the case, but the other teams did have English names and did use English on their uniforms.  Here's a card of Masaru Kageura of the Tigers in a uniform that dates from 1936-40:

Eventually as tensions between Japan and the West increased in the late 30's, there was eventually a decision by the teams to stop using English team names and English symbols on the uniform.  I'm not sure if there was an official "Imperial Charter" or if it was a decision the teams made on their own.  Based on what I see in "The History Of Uniform", it looks like the change in uniform went into effect in the middle of the 1940 season.  For each of the teams there's a uniform with English that was worn up to and including 1940 and a uniform without English worn from 1940 on.

Here's a couple examples - Shosei Go in a Giants...oops, Kyojin uniform circa 1940-43 and Takeshi Doigaki in a Hanshin uniform from the same time period:


In 1943, several of the teams adopted hats that resembled the hats worn by soldiers in the Imperial Army.  By 1944, all the surviving teams had adopted these hats.  Here's an example with Takehiko Bessho of Nankai:

The 1945 season in Japan was cancelled as Japan could not afford to spare the manpower from its military anymore.

Following the war, the American occupational authority (under General Douglas MacArthur) felt that the return of baseball would be a morale boost to the Japanese population.  Professional baseball returned for the 1946 season.  The uniforms of all the teams included English on them and have ever since.  Whether this was something the Occupation forces insisted on or a decision made by the teams themselves is not clear to me.

As Mr. Westbay points out in his response to the original question, Japan is the only one of the three professional leagues in the Far East to use English exclusively on their uniforms.

In Korea, many of the teams have the team name in English on the uniform - but not all of them, at least in 1999:

However, the player names on the back of the uniform are in Korean, even the foreign players:


Similarly in Taiwan, the team names may be either in English or Chinese on the uniforms:


But the names on the back of the uniform are in Chinese:


Interestingly, however, both the Taiwanese and Korean teams for the World Baseball Classic (as well as the mainland Chinese team) have used English lettering for their uniforms, including the names:

An interesting topic. I'd be interested in hearing what a Japanese historian might have to say. I wonder to what extent written English was being used in other aspects of Japanese daily life in those early years. Since the Japanese greatly admired the American game,it doesn't seem too odd that they'd be attracted to the use of English names written in the Roman alphabet for uniforms. For them it's exotic and attracts attention which is good for business. I think the post-war reasons would be much the same only more so because of the closer relationship.

Also, why is there English on Japanese Baseball Cards? I had to ask :)

An excellent question. Not sure I have an equally excellent answer. The first Japanese cards to have English on them (I think) were the 1989 Lotte cards. Calbee switched in the middle of 1989 (in response to Lotte I assume) from not including the player names in English to including them. For the most part, Calbee has included them ever since. WIth a couple exception, BBM has always had the player names in English. Takara never did. I suspect that the main reason was marketing - making the cards more attractive to the US card market, but that's just a guess.

I wrote to Japanese baseball historian Yoichi Nagata for his thoughts on the subject. This is what he had to say:

"Baseball came from the States. This must be the biggest reason. Hove you ever seen Japanese high school uniforms? Some are written in Japanese, but most of them in English.
Do you remember when baseball words were forced to change into Japanese? Yes, it happened during the war. It is not the time of war, but of peace.
Besides those reasons, this is another one that Japanese have been adoring things western since Japan tried to catch up with western countries in the Meiji restoration."

I'm thinking that these reasons likely translate to English usage on Japanese cards, as well as on uniforms and cards in Taiwan and Korea as well.