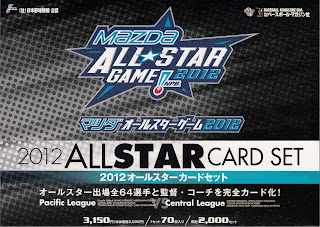 This year's edition of the annual BBM All Star set came out a few months back (although I just got mine in the mail a couple days ago).  As always, this is a box set featuring all the players who made the All Star team this year.  It contains 70 cards - 64 cards for the players on the two league's rosters (32 each) and six cards for the manager and coaches for each league (one manager and two coaches per league).  (Like in the US, the managers for the All Star teams are the managers from the previous year's Nippon Series teams and the coaches are managers from other teams in the league.)

While some of the recent All Star sets have featured pretty hideous card designs, this year's aren't too bad.  They vaguely resemble some of Multi-Ad's minor league sets from around 2000.  As has become standard the past few years, cards of players who made the team due to fan voting, player voting or the "+1" vote have little symbols on their cards to indicate this, as well as a little symbol for anyone making the team for the first time.  Here's a couple example cards (does anyone now if Takeya Nakamura always has his jersey billow like that when he swings?):


Instead of having separate cards to commemorate the All Star Game MVPs this year, BBM decided to simply add another symbol (much larger this time) to the cards of Norihiro Nakamura, Kemta Maeda and Daikan Yoh to indicate that they won the awards.

Like last year, there was no card commemorating the player who got the most votes in the fan balloting (Atsunori Inaba).  There's no symbol on his card either.

For the third year in a row, BBM delayed the release of this set so that they could use photos from the actual games this year.  For the third year in a row, I'm going to complain that you really couldn't tell from most of the cards that they were taken in an All Star game (other than the logo on the side of the player's hat).  There were two cards this year that actually show guys in different uniforms being teammates: