Card Of The Week November 18

I've been meaning to get to this for a while (just like I've been meaning to get to the 1993-94 Teleca Korean cards) - Jason has taken on an amazing endeavour - he's been attempting to catalog 20+ year's worth of Taiwanese baseball cards - both for the CPBL and the short-lived TML.  He found a Chinese website that lists all the sets along with a gallery showing all the cards in all the sets.

I only have a handful of Taiwanese cards and Jason hasn't gotten to the sets that most of my cards are from yet.  But because of Jason, I now know that the following card is from 1990 and shows former Houston farmhand Tony Metoyer: 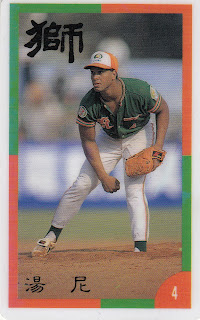 UPDATE:  Jason just posted a checklist for another set that I actually have a pack of cards from - the 1996/97 ProCard set.  Turns out I have another card of Tony Metoyer (card # 155): 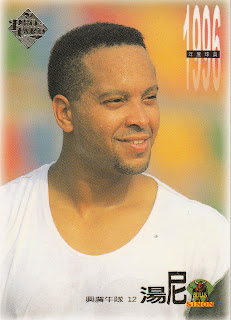 I've emailed the folks at Baseball Reference asking about plans for including CPBL and TML information. Even if they don't manage to get satisfactory statistical information, I'm hoping I can help populate team rosters so players like Metoyer, George Hinshaw and Luis de los Santos don't have large gaps in their minor league career listings.

As I've worked into the mid-90s, I'm seeing that a lot of players from the 1993 Lime Rock Dominican Winter Baseball set are in the 1994 and later CPBL sets.

If anyone reading this has any talent with converting names in Mandarin to their romanicized equivilents, I could use a lot of help!

I had drawn a to-do list of sets I need to compile, and in a flurry of too many window switches, copies & pastes, I lost the whole thing. I'll rebuild that and get it posted to my blog sometime this week. It was a surprisingly long list, and probably very imcomplete at that.