Card Of The Week November 4

This year's Nippon Series wrapped up yesterday with the Giants winning their 22nd Championship by beating the Fighters 4-3 in Game 6.  The play that everyone has been talking about, however, happened in Game 5.  If you missed it, here's a replay of it (until it gets pulled from YouTube for copyright infringement):

Without knowing what actually happened, you might think this is a fairly routine play - the pitch is a little up and in and the batter, Ken Katoh of the Giants, throws himself on the ground a little theatrically to avoid getting hit.  Incredibly, however, the home plate umpire decided that Katoh had actually gotten hit in the helmet and awarded him first base.  To add insult to injury, he also decided that the Fighters pitcher, Kazuhito Tadano, had thrown a dangerous pitch so he ejected Tadano.

The Giants already had a good lead in the game when this happened so it probably didn't effect the outcome of the game.  Still it's instructive to see the Giants mirror the Yankees in yet another way - getting ridiculously generous calls by umpires in post-season games.

I mean, if this had happened, maybe I could see that call being made...

Kato has been kicking around the ni-gun Giants for 13 years now.  He was drafted in the third round in the 1999 draft.  He's only appeared in 130 games at the ichi-gun level since he signed with Yomiuri although he's now appeared in two Nippon Series (2008 and this year).  He's only appeared in one of the major BBM sets (in 1999).  His only other appearances on BBM cards are in the annual Giants sets and the 2008 Nippon Series set.  Here's his 2005 BBM Giants card (#G039): 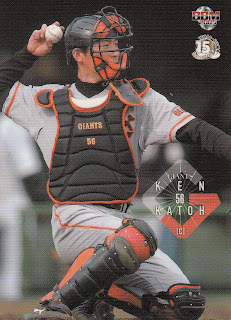 I was kind of surprised that he didn't get one of the Nippon Series awards (especially after the Climax Series MVP was a guy who went 1-3 in the six games of the Climax Series - although granted that one hit was a big one).  Perhaps they need to create a "Best Actor" award just for him.

I want to credit this Yakyu Baka post with the details of the play, and the YouTube and "Fighter's Girl" links.
Posted by NPB Card Guy at 8:07 PM