Size:  432 cards
Cards Per Team:  32 (team card, manager + 30 players)
Team Card Theme:  Spring Training
Number Of Leader Cards: 33
Checklists: None
Subsets: 2002 Retirement Players (15)
Inserts: Best 9, Golden Gloves, Slugger, MVP (Light Packs only)
Memorabilia Cards: Jersey or windbreaker cards for the 2002 League MVPs - Hideki Matsui and Alex Cabrera; Jersey or windbreaker cards for the 2002 ERA Leaders - Masumi Kuwata and Masahiko Kaneda; Four different Combo Jersey or windbreaker cards - one with Matsui & Cabrera, one with Matsui & Kuwata, one with Cabrera & Kaneda and one with Kuwata & Kaneda.  (When I say Jersey or Windbreaker - I don't know for sure which it is.  Engel is unclear.)
Parallels: 120 cards have black facsimile autographs, 60 cards have a kira version (Light packs only).  There's also an orange parallel of the Leader cards and an autographed (real autographs!) parallel of the Retirement Player cards.  UPDATE - there's also a "silver" version of the Leader subset with the Light Packs.

Ahh 2003.  The year it started getting really complicated...

2003 was the year that BBM decided to introduce a second type of pack to sell cards in - the Light Pack.  Up until 2003, BBM had always sold their "flagship" sets in 10 card packs for 200 yen.  The Light Packs were five card packs sold for 100 yen.  There were more differences in the two packs than the amount of cards.  The 10 card packs could have any of the cards 1-432 in them as well as the memorabilia cards, the Best 9, Golden Glove and Slugger inserts and the facsimile autographed parallels.  The Light Packs would only have cards 1-405 in them (no Retirement Players or Team Checklists), no memorabilia cards, only a 2 card MVP insert and only the Kira parallels. 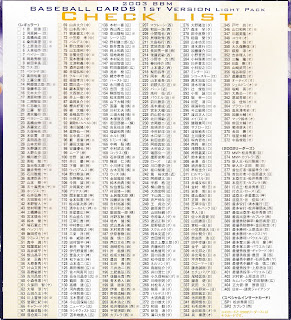 After being put in separate sets in 2002, the Best 9 and Golden Glove inserts were reunited again.  Each insert set had two parallel versions - a serially numbered to 300 version and a send away version.

The twelve cards in the Slugger insert set had a playing card theme.  I'm not sure how the suit was selected for each card but the playing card number is the player's uniform number.  They had a gold parallel that were each serially numbered to 100.

There were 60 cards with Kira parallels in the Light Packs, five per team.  I know I have some but I couldn't find them in time for this post.  I will update this post later when they turn up.

This is actually one of my favorite BBM sets.  There's something about the design I really like, even though typically I prefer full bleed photos, not these faux white borders.  In my opinion, this would be the last attractive BBM design until 2006. 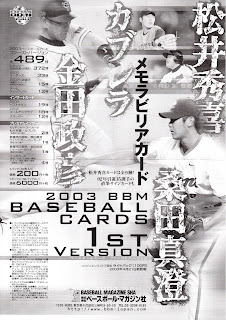 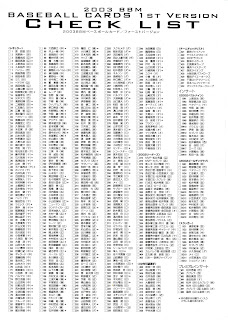 UPDATE: Still haven't found any of my Kira parallels, but I discovered that I had one of the orange parallels for the leader cards (#392).  Apparently they were numbered to 500: 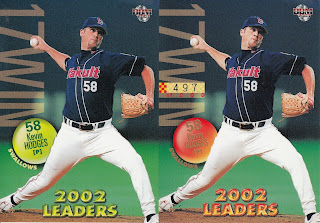 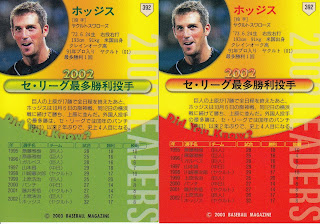 Not sure the scan really does it justice.  It's basically a "shiny" version of the card with some sort of dotted pattern in the background.

I also discovered another parallel that Engel does not list - there was a silver version of the Leader subset that I'm pretty sure were only found in the Light Packs.  I don't know for sure but I assume that there's a silver version for each Leader card:

These may be considered "kira" as well although they don't have the dotted pattern in the background like the player cards do.  Engel does not list the Leader cards with the kira cards in the checklist however.  I did notice that Jason was already aware of these parallels.
Posted by NPB Card Guy at 8:34 PM

Based on how it they were listed in Gary Engel's guide and a conversation with Deanna Rubin awhile back, it is my understanding that the Kira cards for that year are ONLY available in the Light Packs.

Ryan had a post up about this recently - it's really getting hard to keep track of BBM's parallel issues lately.

I guess it was the way you phrased it that provoked my excess precision.
"... only a 2 card MVP insert and only the Kira parallels."

Sounds like the Light Packs only had those cards, but not that those cards were only found in Light Packs. Oh, English. Why do you torment me?