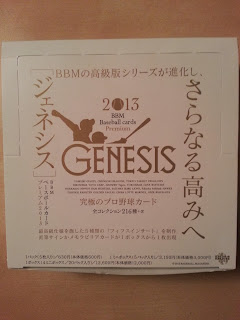 So I've probably pretty much established that I'm not a big fan of the high end cards, including BBM's high end sets (Diamond Heroes, Touch The Game and the current one, Genesis).  And if you've been reading me for a while, you know that I usually buy complete sets, not unopened material.  So you might be surprised that I'm doing a post about opening a box of this year's Genesis.  Well, there's a simple explanation - it's not my box and it's not my box break.

I got an email the other day from a reader named Pete who, during the course of the conversation, revealed that he had recently picked up a box of Genesis.  I asked him if he'd be willing to give me the breakdown on the box for a post and not only did he agree, he was kind enough to take a bunch of pictures and send them.

The Genesis set has a base set of 120 cards - 108 player cards (9 per team) plus 12 team checklists.  In addition there's 36 cards for the final edition of the "Cross Wind" cross set subset (3 per team).  There's also a bunch of insert sets and various memorabilia cards available.  And parallels.  Lots of parallels.  You can see all the regular cards here and a bunch of the inserts, parallels and memorabilia cards here.

Pete told me that he had ordered the box from Niki via Rakuten Global Market.  He says that the box actually contains four smaller boxes in it.  Each of the smaller boxes contains five packs containing five cards each.  So there's 100 cards total in the box. 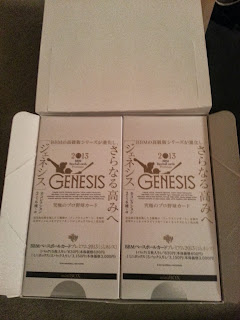 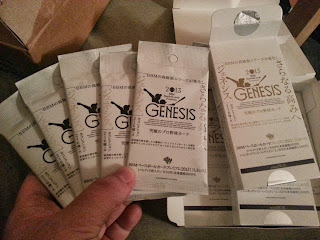 He got a total of 98 different cards in the box - only getting two doubles!  That's amazing.  Actually, from someone who used to try to build sets by opening BBM boxes 10 years, that's completely unbelievable.  Either BBM has greatly improved their card collation process or Pete's the luckiest guy on the face of the Earth.  (Both options are possible.)

From the base set, Pete got 70 unique cards (including three team checklist cards) plus two doubles.  Here's some photos of the base cards:


Nice to see that BBM has been able to come up with a theme for the team checklists that's more useless than the mascot ones.

Pete also got three parallel cards - a green Mistuo Yoshikawa (serially numbered to 100), a red Motonobu Tanishige (numbered to 50) and a silver Katsuya Kakunaka (numbered to 25):


He got 23 cards (all singles, no doubles) from the Cross Wind subset:


And now for the good stuff - he pulled an "Ultra Nova" insert card of Hisayoshi Chono.  It's serially numbered to 50 - I don't know if it's a parallel version of the insert or if all the Ultra Nova inserts are serially numbered:


And, saving the best for last, Pete pulled a Sho Nakata Jersey card (numbered to 400):

So thanks Pete for sharing the photos and stats on the box.  If anyone else opens a box and wants to share photos and stats, let me know.  I think this is a cool way to get a little bit of information out that's different than what I normally post about.
Posted by NPB Card Guy at 9:48 PM

just curious... how much do these boxes usually sell for?

It's currently listed on Rakuten Global Market at $95.97. The website says that price is 25% off - I don't know if that's due to Rakuten's sale for the Eagles pennant clinching. I don't know what Pete paid (or how much shipping was).

That's what I paid for that box, $95.97. I preordered my box, so the discount they're listing doesn't look to have anything to do with the Eagles sale. I didn't get any options on the shipping other than EMS, so door to door it was about $110. I got the box in about 3 days, so I don't mind the shipping charges too much. 3 days from Japan to Chicago isn't bad at all

My biggest complaint with ordering from Rakuten is no option for shipping other than EMS and not knowing what the shipping charge will be until after they charge your credit card.