I received the two boxes of the new KBO set (Super Star Baseball Card) that I ordered from Ebay in the mail today.  It took about two and a half weeks from when I ordered the cards for them to be delivered.


So to recap the stats for the set - each box contains 20 six card packs, so there's 120 cards in each box.  The set itself has 126 cards, but 54 of those cards are short prints so there's only 72 "regular" cards.  Of the 54 "short prints", there are nine "Superstar" cards with gold signatures, 18 "Big Star" cards with hologram text for the player's name, number and team name and 27 "All Star" cards with "holographic" fronts.  All the cards have identical backs except the "All Star" cards.  Everything but the "All Star" cards look like they can be used in some sort of collectible card game.  There are currently nine teams in the KBO and the cards are split evenly among them.  So each team has 14 total cards - 8 "regular", 1 "Superstar", 2 "Big Star" and 3 "All Star".

Here's how the boxes broke down:

So I ended up just short of the complete "regular" card set and got a little less than 40% of the short prints.  With 90 cards in all, I have about 71% of the total set.

The cards themselves are reasonably attractive.  They're a little cluttered on the front with the game playing stuff but the photos are pretty nice looking:

Great shot of Yong, but he missed the ball...

Here's examples of the "Superstar" and "Big Star" cards:


It's a little hard to tell from the scans but Park's signature is gold and Yoon's name, number and team name are in a holographic foil.  I want to stress that these are not parallel versions of "regular" cards - these are the only versions of cards #043 and #079.

Here's an example "All Star" card.  As you can see, it doesn't have any of the game-related text on the front.  The backs of these cards are the only ones that show the player's name in English.  Curiously, the names are given with the surname last.


In addition to the six cards, each pack also contains either an "item" (which apparently can be used in the on-line game the cards go with) or a "redemption" card (that can be exchanged for autographed cards).  Well, at least that's the theory - all 40 packs I opened had an "item" card.  It's just as well as I couldn't have exchanged the "redemption" card anyway.  Here's what one of the "item" cards looked like (with the code removed): 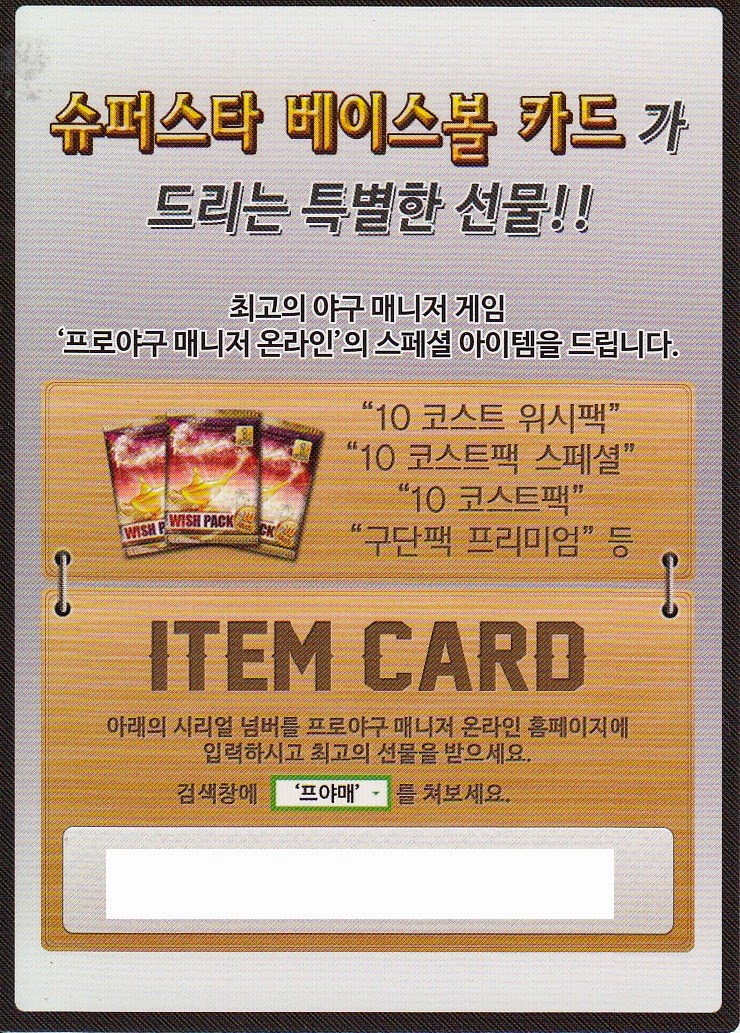 I think the consensus is that this is the first series of cards for the year and there will be an additional series (or more) later this season.  I think I will limit myself to only one box of an additional sets, especially if the ratio of short prints to normal cards continues to be so large.

I've got to give a quick thank you to Jason for doing the ridiculously hard work of transcribing all the Korean names from the checklist on the company website into English and entering them into the Inventory Manager over at Sports Card Forum.
Posted by NPB Card Guy at 9:57 PM

So it does look like this is sort of a smaller version of the Baseball Heroes or Owners League type set. I hope it catches on, if only so there are more cards made. But based on your results, and the complaints on the MyKBO.net Facebook page, I hope they do better with the collation in the next series. Maybe just by having a larger base set and fewer short prints, so collectors won't end up with so many duplicates. With that rate of duplicates, they wouldn't even be good trading fodder because everyone else collecting them would be stuck with the same pile of dupes. On the bright side, maybe one or two of these guys will get signed in MLB soon and you'll have a quick return of your investment.

I love that the Japanese, Korean and Taiwanese teams aren't afraid of bright colored uniforms. Except for the all yellow Brother Elephant/Chinatrust Brothers. That's just too much yellow in one place.

It's good to see these out and about. I wouldn't mind getting one of each type for my collection at some point... but that goes without saying.

The collation is actually really bad if you have that many duplicates in a box without a full set. With 109 regular cards in each box, and 72 regular cards in the set, there should be a complete set of the base cards. It would be the SPs that you wouldn't get a full set for.

It reminds me of Panini - I busted Triple Play boxes from 2012 and 2013, and both times the insert and/or sticker collation has been piss poor with duplicates, triplicates, or quadruplicates. At least the base cards worked out pretty well.

At least with a box you get at least one of each type of card; that's something I really appreciate as a type collector.

I'm not so sure these work like BBH or Owners League. I don't see a code anywhere, which makes me wonder how you use them online. How do you prove you have any particular card? I could claim to have all the best cards without actually owning them.

By the way, just because I thought it's worth mentioning, the comment moderation image showed a mailbox. With blurred out everything - no number or name.
"Type the text:"
"" ...

Ryan - I was already planning on putting a couple aside for you.

There's a couple cards that I got five of between the two boxes. So yeah, the collation really sucked.

That's a good point about the lack of codes. My guess is that they're meant to be used in some sort of table top game against someone else (hence the identical backs so they can't see what you're holding). Which means I'm not exactly sure what the code on the "item" cards unlocks.

I guess Konami's older Field of Nine sets would have been a better comparison. They were strictly in-person trading card game material.

Thanks for all the info about "Super Star Baseball Cards"! I'm an avid fan of the KBO and I started collecting these cards when they were released earlier this year. As you can imagine, I have the same complaints that others have: too many duplicates!

However, in the last week, "SSBC" released the "2014 Season 2" cards ("2014 Season 1" cards being the only cards available up until recently). The S2 cards appear to be different in two ways:
1. The S1 cards come in a dark gray/graphite-colored box/packet, whereas the S2 cards come in a silver box/packet.
2. Where there is a box with an arrow in the lower left corner of the S1 cards, the S2 cards have a square of holographic foil. (On a side note, does anyone know what the arrow from the S1 cards signify?)

Yet, the most important thing I should add is that the S2 cards seem to fill in the gaps in terms of the cards I was not getting from the S1 cards. I don't know if the S2 cards have more of the rarer cards or if I just got lucky. Does anyone have any more info on the difference between the two "Seasons"?

All I know about the new set is the preview I did a couple weeks ago. I just ordered a box off Ebay the other day so I'll know some more in another week or two.

Ahahaha! I read your "Season 2" preview right after I posted my comment. Sorry about that.

Thanks for all the hard work!

Hi Jason, is Rick van den Hurk, Samsung Lions, in the set? Thanks Arno from the Netherlands

I'm not Jason but I'll answer anyway - there are no foreign players in either this set or the second set that was released in August.