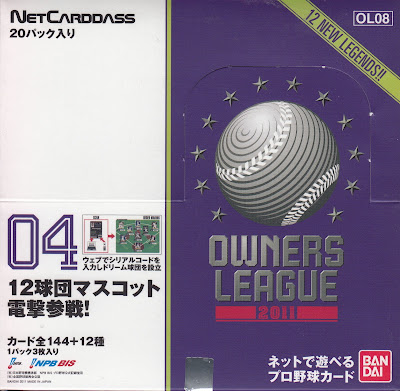 I recently picked up a box of 2011 Bandai Owners League 04 from a seller on Amazon.com - and in this case I do mean the US Amazon.com.  Jay Shelton had been telling me for a while that these were available fairly cheaply but I usually don't do much with the collectible card game cards so I never did anything about it.  But I recently discovered a reason to be interested in these.

Let me explain.  BBM issues two "flagship" sets each year - the 1st Version set that is published in mid-April and the 2nd Version set that is published in mid-August.  Both sets go to press much earlier than that - I suspect that the 1st Version's cut off is mid February and 2nd Version's cut off is around the end of May.  But the "trade" deadline for NPB is the end of July - this is the latest date in the season that a team can add a new player.  So there's two months of the season where a team could sign a new player or make a trade that would not be reflected in one of BBM's flagship sets.  Now BBM does publish their high end set in mid-September but that tends to be a small set and most likely won't include any newly acquired players.  Calbee also puts out a set in mid-September but it is a small set too - and usually it contains players who were also in their earlier sets for the year.  So the chances of one of these new or traded players making it on to a baseball card is pretty slim.  Or are they?

Bandai started putting out the Owner League sets in 2010.  They issued four sets a year through last year (looks like they have not published any cards this year) called "01", "02", "03" and "04".  I don't know for sure what time of year the fourth series comes out, but it is apparently late enough in the season to get some of these players.  For example - in 2010 the Eagles signed former Hanshin Tigers pitcher Keiichi Yabu to a contract on July 31st after he'd spent five seasons in North America.  He appears in the 2010 Owners League 04 set - his only other card with the Eagles that I know of is the 2014 BBM Eagles 10th Year Memoral set.  Similarly Alfredo Despaigne, Duente Heath and Nick Evans signed with the Marines, Carp and Eagles respectively in late July of 2014.  The only BBM cards they had that year were in Sports Card Magazine #107 but they all three appeared in the Owners League 04 set (along with several others who signed after 2nd Version went to press).

So my curiosity about the "04" sets was piqued and I wondered if the 2011 edition could help answer a question I've had for a bit.  On June 30th of 2011, the Yomouri Giants acquired long time Chiba Lotte Marine Saburo Ohmura.  Saburo (his registered name) remained with the Giants for the remainder of the 2011 season but he resigned with the Marines for 2012.  As far as I know, he never had a BBM card showing him with the Giants.  So did he appear in the Owners League 04 set that year?  I took a look at The Trading Card Database but unfortunately they did not have the checklist for the 2011 set.  But I remembered that Jay had told me I could find these boxes on Amazon and I had just gotten a gift card for my birthday so I decided to give it a shot.  I was able to find the box for about $14 and it was delivered a few weeks later.

The set itself has 156 total cards, although I think the base set really only has 132 cards - 48 of which are possibly short-printed.  There are 12 "Legend" cards and 12 "Idol" cards that I think are considered inserts.  The "Legend" cards feature OB players while the "Idol" cards feature mascots.  The possible short-printed cards are 12 "Great" cards, 12 "Super Star" cards and 24 "Star" cards.  All of these are active players.  The remainder of the cards are either "white" (48 cards) or "black" (36 cards).  If you hadn't already guessed, each of these groups of cards are split evenly between the 12 teams.


The box contained 20 3 card packs for a total of 60 cards.  I was extremely surprised and pleased that I didn't get any doubles in the set.  Here's the breakdown:

So did I get Saburo?  In the very first pack I opened:

There are several other players in the set that were newly acquired by their teams - Brian Barden of the Carp, Ryan Mulhern of the Lions and Luis Garcia of the Eagles.  Barden and Garcia would remain with their teams in 2012 and have BBM cards that year but Mulhern did not return to the Lions so this is his only NPB card that I know of.  A number of the other players in the set did not appear in either of BBM's flagship sets in 2011 although they did not change teams.  And the set also contains a number of bigger names like Masahiko Morino, Norihiro Nakamura, Tomoya Satozaki and Shinya Miyamoto.  As you would expect, the short-printed "Great", "Super Star" and "Star" cards are all big names - Kenta Maeda, Yoshio Itoi, and Hisayoshi Chono are among the cards I got.

While this was fun, I'm still don't think I'm much of a fan of the Owners League cards.  I like getting complete sets and I think the short prints would make it difficult to put these sets together.  I will consider buying boxes of the other "04" sets however
Posted by NPB Card Guy at 9:21 PM