One of the new professional teams to join the Central League in its debut season of 1950 was the Taiyo Whales who played in Shimonoseki, Yamaguchi.  The team merged with the Shochiku Robins after the 1952 season and were known as the Taiyo Shochiku Robins for the next two seasons.  The team played their home games in Osaka those two seasons.  Following the 1954 season Shochiku sold their interested in the team and the name reverted to the Taiyo Whales.  At this time the team moved to Kawasaki, Kanagawa where they would remain for the next 22 seasons.  The team moved a little south to Yokohama in time for the 1978 season and became known as the Yokohama Taiyo Whales.  The team name changed to the Yokohama Baystars following the 1992 season due to the parent company changing their name from Taiyo to Maruha.  Maruha sold the team to the Tokyo Broadcasting System (TBS) in 2001 but the team name remained the same.  TBS sold the team to DeNA prior to the 2012 season and the team name became the Yokohama DeNA Baystars.

I rounded up the usual suspects as my sources for this - The History Of Uniform, Professional Baseball Uniforms Encyclopedia 1936-2013 and the uniform posts from Yakyu Baka and Yakyu DB.

NOTE - I list all the uniforms I've identified, even ones that I don't have cards for.  Don't panic - the blank spots don't mean there's a photo your browser isn't loading.

I think I did pretty well on this one considering the multitude of uniforms and the fact that there really aren't any OB team sets for the Whales/Baystars that cover the years before 1978.  Although I don't understand how I managed to do this without a card of Takuro Ishii.

The colors are wrong on the uncataloged bromide I'm using for one of the 1950-51 uniforms.  "Whales" should be in navy not red.

I believe that the Whales were the first Japanese team to have numbers names on the back of their uniforms.  They started in 1964.  They also had a variant that had "Kawasaki" (the team's home city) on the back in place of the name.

There's numerous differences between the illustrations in HOU and the photos in PBUE.  For the most part I went with what PBUE said.

The Baystars farm team was sponsored by a company called Shonan from 2000 to 2010 so the team was known as the Shonan Searex.  They had a uniform that was different than the parent team.  (Orix did something similar but I've never seen a baseball card of a player wearing a Kobe Surpass uniform.)

There are two uniforms on cards that I have not been able to identify.  The first is this card of Toru Mori from the 2015 BBM Memories Of Uniform set (#037): 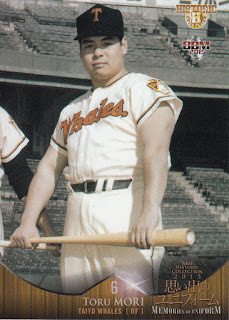 The Whales won the 1960 Japan Series and wore the patch you see on the left sleeve of Mori's jersey during the 1961 season.  But Mori didn't join the Whales until 1962 and I've seen no pictures indicating that the Whales had a jersey at that time that did not have the player's uniform number on the front.  All I can guess is that this was something he wore during training camp in 1962.

The other uniform I can't place is on this card of Masaji Hiramatsu from the 2002 BBM All Time Heroes set (#037): 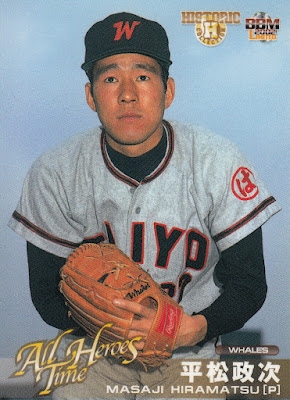 The uniform looks very much like the Away uniform worn between 1964 and 1972 but I've only seen that hat with the 1973 Home uniform.  I've got no idea unless there simply was another hat used in those years (or at least after Hiramatsu's rookie season of 1967).
Posted by NPB Card Guy at 7:55 PM

Nice overview. I like that old bromide (even with the wrong color on the name).

Also I didn`t realize before that the Whales/Baystars originally played in Shimonoseki. That is really bizarre, Shimonoseki is a tiny city in the middle of nowhere, I wonder how they ended up down there.

The Taiyo corporation was based in Simonoseki in the late 1940's. The team itself started out as an amateur team in the 1930's (basically what we would think of as an industrial league team today) run by Taiyo. They "went professional" in 1950 when the two league system started up.