Card Of The Week August 27

The 99th Japanese High School Baseball Championship (aka Summer Koshien) wrapped up last Wednesday with Hanasaki Tokuharu defeating Koryo 14-4 in the title game.  (Koko Yakyu has a great writeup of the game here.) It was the school's first ever championship and actually the first Koshien championship ever won by a team from Saitama.  The talk of the tournament, however, was Koryo's catcher Shosei Nakamura who had 19 hits in 28 at bats including 6 doubles and 6 home runs.  The numbers work out to a batting average of .679, an OBP of .688 and a slugging percentage of 1.536.  He also had 17 RBIs and scored 12 runs.  He set new tournament records for home runs, RBIs, and total bases and tied the records for most hits and doubles.  Needless to say, he made the tournament Best 9 team.

The previous home run record was set by PL Gakuen's Kazuhiro Kiyohara in 1985.  Kiyohara of course went on to have a 22 year career in NPB playing for the Lions, Giants and Buffaloes.  He had 2122 hits and 525 home runs in his career.  These totals would have made you think he was a shoe-in for the Hall Of Fame and you'd be right except for the fact that he had always been associated with "seedy" elements off the field.  I fear that his chances for being enshrined ended last year when he was arrested for use of illegal drugs.

Kiyohara hasn't appeared in a baseball card set since BBM's "Memories Of Uniform" set was released in late 2014 but BBM did do a biographical set for him when he retired after the 2008 season.  Sports Card Magazine #73 that was published in January 2009 included a promo card for this set that was designed to look like a card from the 2009 BBM Rookie Edition set (the magazine also included Rookie Edition cards of Eri Yoshida and Sadaharu Oh - Oh's card was a promo for the biographical set BBM had just released for him).  The front of the card (SCM #113) shows Kiyohara as he appeared when the Lions drafted him in the first round of the 1985 draft: 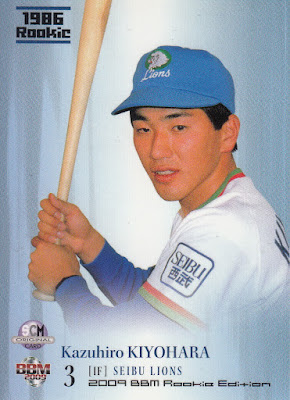 The back of the card is an ad for the set: 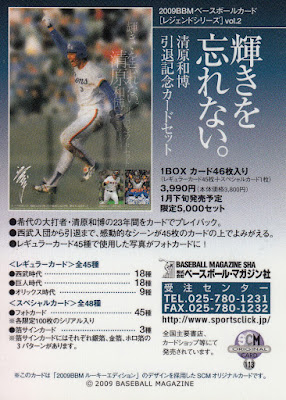