The 1980's were the Golden Age of NPB teams sending players to the US to play in the minor leagues.  It started with the Seibu Lions sending players to San Jose in the California League in 1983 and by the end of the decade eight of the other NPB teams had sent players overseas to North America.  Only Lotte, Nippon Ham and Hankyu/Orix did not.  I don't know why this happened for sure but I can speculate.  First of all Seibu was by far the most successful team in Japan in the 1980's, winning six Pacific League pennants and five Nippon Series during the decade so it would make sense for other teams to emulate them.  Secondly the 1980's were when Japan was really flexing its muscles as a global economic superpower and I suspect that somehow sending players to learn in America tied into that although I don't think I know enough to understand quite how.

The first team to follow the Lions lead in sending players to America was the Kintetsu Buffaloes in 1986.  Like Seibu the Buffaloes made an agreement with an independent team in the affiliated minors - the Salt Lake City Trappers of the Pioneer League (Rookie Classification).  Unlike San Jose however the Trappers were very successful on the field - they had won the league championship in 1985.

The Buffaloes sent two pitchers to Utah in 1986 - Tsuneto Fukuchi and Shintaro Yamasaki.  While neither player put up fantastic numbers (Fukuchi went 2-4 with a 5.43 ERA, Yamasaki went 3-5 with a 5.20 ERA) but both were mainstays of the rotation - Yamasaki had the most starts of any Trapper pitcher that year (14) and Fukuchi was tied for third most starts (with 12).  The Trappers ended up winning another Pioneer League Championship that season.

Kintetsu send two more pitchers in 1987 - Yasuhiro Hiyama and Koichi Ikeue.  Ikeue started the second most games of any Trapper pitcher (12) and went 6-3 with a 4.70 ERA while Hiyama started seven games and went 3-1 with a 5.57 ERA.  The Trappers had a record setting 29 game winning streak that season on their way to their third straight Pioneer League title.

The Buffaloes did not send any players to Salt Lake City in 1988 and the Trappers failed to win the league championship for the first time that season.  The two events are probably not related but just to make sure the Trappers got three players from Kintetsu for the 1989 season.  In addition to the now standard two pitchers (Akihiro Fukushima and Shigeki Taguchi) the Trappers also got a position player - Shingo Matsukubo.  Fukushima went 3-5 with a 5.10 ERA in 16 games that were split between the starting rotation and the bullpen.  Taguchi pitched almost exclusively out of the bullpen - he only made one start in the 14 games he appeared in, going 0-1 with a 8.57 ERA.  Matsukubo barely appeared for the team - he got one single in six pinch hitting appearances.  It's not clear to me that he ever actually played in the field.  The Trappers finished in second place but suffered their only sub-500 finish in the eight years they played in the Pioneer League.

1989 was the final season the Buffaloes sent players to Salt Lake City.  I don't know if either the Trappers poor finish or the Buffaloes winning the Pacific League that year had any effect on the decision to end the agreement - in fact I don't know who decided to end it.  The Trappers had their third straight second place finish in 1990 but made the playoffs which they ultimately lost to Great Falls.  They won the league championship again in 1991 and finished first one last time in 1992 before losing in the playoffs to Billings.

To some degree it was an embarrassment for MLB to have an independent team dominate a league of affiliated teams and the Trappers were ultimately eliminated by the AAA Portland Beavers moving to Salt Lake City in 1993, forcing the Trappers to move to Pocatello Idaho and become a Co-op team called the Posse.  The team moved to Ogden, Utah in 1994 and became the Raptors.  They picked up a Player Development Contract with the Brewers in 1996 and have been affiliated with the Dodgers since 2003.  It's probably not an unreasonable assumption that the success of the unaffiliated Trappers helped inspire the independent minor leagues like the Northern and Frontier Leagues which started in 1993.  In fact actor Bill Murray was involved in the ownership group of the Trappers and would be involved in the ownership group of the most prominent Northern League team - the St Paul Saints.

Here's a summary of the players the Buffaloes sent to Salt Lake City:

Yamasaki by far had the most successful career of the seven players.  He spent 16 of his 18 year career at the ichi-gun level and went 87-92.  His best seasons were probably 1988 when he went 13-7 with a 3.10 ERA and 1994 when he went 12-10 with a 3.41 ERA and made the All Star team.  Yamasaki also has appeared on the most Japanese baseball cards of the former Trappers - including cards from Takara, Calbee, Lotte, Q-Cards, Konami, Epoch and of course BBM.

Ikeue made his ichi-gun debut in April of 1987, several months before going to America.  He's the only one of the seven players to play for the top team before playing for the Trappers.  He ended up spending most of his career working out of the bullpen - only starting 16 of the 167 NPB games he got in.  His best season was probably 1994 when he went 4-1 with a 2.65 ERA in a middle relief role.  He had around 10 Japanese baseball cards, mostly from Takara and BBM.

Matsukubo only had 149 plate appearances in 79 games over six seasons with the ichi-gun Buffaloes but still managed to have five Japanese baseball cards - all from BBM except for one Takara card.  Hiyama did this one better - despite never making an appearance at the ichi-gun level, he had two Japanese baseball cards - Takara issues from 1986 and 1987 (neither of which I have).  I would guess this would be a function of him being the Buffaloes's 1st round draft pick in 1985.

None of the other three players had any Japanese baseball cards.  Fukuchi is the only one of the three to play at the ichi-gun level - he made one appearance in 1987.

According to Baseball-Reference, Salt Lake City was not the only minor league team that Shigeki Taguchi played for in 1989 - he also made 63 appearances for Salinas that season.  This seems a bit odd to me that Taguchi would get in that many games with Salinas and still appear in 14 games with Salt Lake City.  There's also the fact that Salinas' agreement was with the Hawks and Swallows.  Baseball America's 1990 Almanac lists the pitcher with Salinas as "Dragon Taguchi" which doesn't really help much.  I wonder if it's possible that the Salinas pitcher is actually Ryuji Taguchi, who was a left handed pitcher (like Shigeki Taguchi) and was the Hawks #1 pick in the 1984 draft.

There was no team set done for Salt Lake City in 1986 so there are no American minor league cards for Yamasaki or Fukuchi.  But there was a set in 1987 that was sponsored by the TacoTime chain of restaurants and Hiyama and Ikeue are both in it: 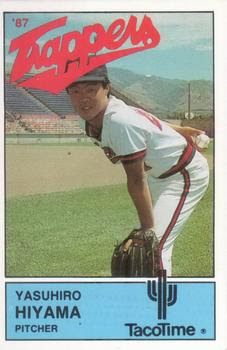 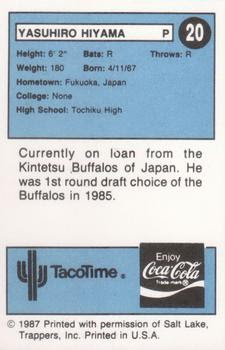 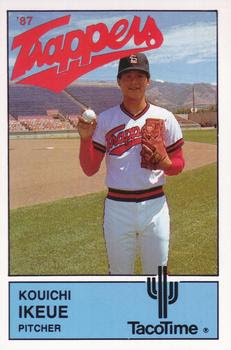 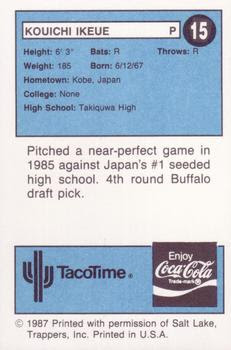 I don't actually own these cards - I swiped them from Trading Card DB where Jason had uploaded them.

There was also a team issued Salt Lake City set in 1989.  Fukushima, Matsukubo and Taguchi share card #12 in the set.  Unfortunately I have not been able to find an image of this card online anywhere.
Posted by NPB Card Guy at 8:08 PM

Hiyama played for the Raiders in 1992? I thought the KBO didn't allow foreign players until 1998?

Hmm...that's an excellent question. I don't have a good answer. Maybe the KBO didn't allow non-Asian foreigners until 1998. I'd have to do some research to see if there were other Japanese players in the KBO before 1998.