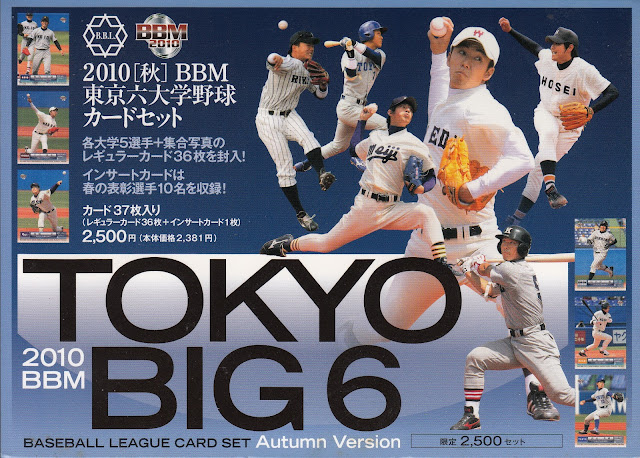 BBM published their sixth set for the Tokyo Big Six League and their seven overall collegiate set in September of 2010.  The set was the Tokyo Big Six Autumn Version set.  Like the two previous Autumn Versions, this was a box set with a 36 card base set.  There were 30 player cards (five per team) plus six team cards.  The boxes also contained one of ten possible insert cards featuring either the Best 9 players from spring 2010 season or the ERA leader from the spring (Kazuki Mishima).

Ten of the 30 players in the set would go on to play in NPB.  Nine of these players had been in previous Tokyo Big Six sets - the only newcomer was Koji Fukutani of Keio.  Seven of the ten players are still active.  Here's the list:


Here's each of their cards from the set along with a card of them from their time in NPB.  I've tried to pick a card I haven't already shown but I have more cards of Kagami as a collegiate player than I do of him as a Baystar so his card will be a repeat.

This was Yuki Saitoh's final appearance in a BBM collegiate set before being drafted by the Fighters in the fall of 2010.  I remember being concerned at the time that it would be the last Tokyo Big Six card set since I was (and still am) convinced that BBM only did the sets to cash in on Saitoh's popularity after the 2006 Koshien tournament.  I was pleasantly surprised when they continued issuing the sets - there would be four more after this one - Spring and Autumn Versions in 2011 followed by single issues in 2012 and 2013.
Posted by NPB Card Guy at 9:54 PM

Yuki Saitoh stands out, because he was the most expensive name in that 2008 UD USA Japanese Collegiate A/S relic set.