Card Of The Week September 27

Former Chunichi Dragon, Baltimore Oriole and Miami Marlin Wei-Yin Chen is returning to Japan.  He signed a deal with the Chiba Lotte Marines last week.  He'll be joining the team after he clears quarantine which will probably be another week (H/T NPB Reddit). 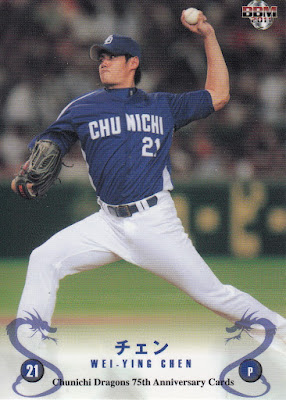 As you can tell from this card, BBM has had multiple ways of spelling Chen's name including "Wei-Ying Chen" and "Weiyin Chen".
Posted by NPB Card Guy at 3:13 PM