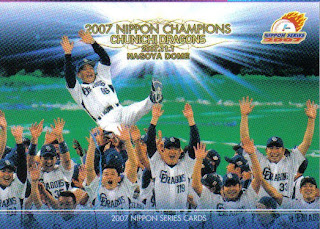 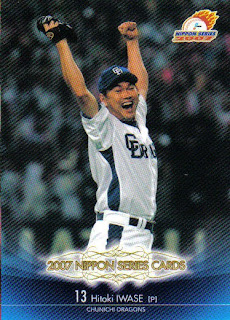 The 2007 BBM Nippon Series set is out. BBM produces an annual box set dedicated to the Nippon Series. A typical set contains the cards for all the players for the two teams in the Series as well as their managers. There's also cards commemorating the winners of the Series MVP award, the "Fighting Spirit" award (basically, the MVP of the losing team) and the "Outstanding Player" awards (three awards to highlight players who were outstanding (duh!), but not quite MVPs. Typically they all come from the winning team, but occasionally a player from a losing team wins). A final card commemorates the winning team. In older sets, this was a posed team photo of the winning team, but lately it's a picture of the winning team celebrating. 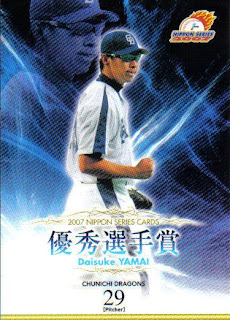 This year's set contains 64 cards - 28 cards for the Dragons, 30 cards for the Fighters, the MVP card for Norihiro Nakamura, the "Fighting Spirit" card for Yu Darvish, "Outstanding Player" cards for Daisuke Yamai (hmm, wonder what he did that was so outstanding), Masahiro Araki and Masahiko Morino plus the winning team card. As always, the pictures used on the cards were all taken during the Series itself, so for example the card of Fernando Seguignol of the Fighters shows him reacting after hitting one of his two home runs in the Series and the card of Hitoki Iwase shows him with his arms raised up after getting the last three outs of the Series. 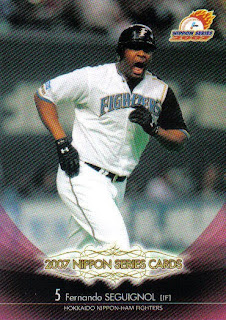 While I'm talking about new stuff, I want to mention that BBM's web site has listings for this winter's nostalgic set ("Back To The 70's") and the Rookie Edition. The "Back To The 70's" set may already be in stores in Japan, but I haven't seen it at Yakyu Shop yet. I think it contains cards of OB players from the 1970's as well as current players who were born in the 1970's. The Rookie Edition set contains cards of the players drafted in last month's draft. I believe that the set will actually be released in February.
Posted by NPB Card Guy at 6:58 PM

Ah, yes. I already have some packs of the Back to the 70's and a couple from the Rookie Edition too. They've both been in stores in Japan for a month or two, actually. I was actually going to do a card post of my own one of these days due to picking up a few more Fukubukuros at the card shop down in Jimbocho.

But yeah, the 70's set kind of bugs me. It's only like half OBs and the cards aren't anywhere near as cool as the Nostalgic set was last year. The Rookie edition set is pretty cute, with team rookie photos on the back. I was going to collect until I got one of each team -- don't really care if I get one of each player. I'm still missing 5 teams after 2 packs though.

I'm pretty sure BBM's annual "Historic" sets are always half OB and half current players. With the exception of last year's Draft Story set, I usually just get a few packs to see what they look like. Same with the Rookie Edition. How many cards of guys wearing a jacket and tie and making a "guts" pose do I really need?