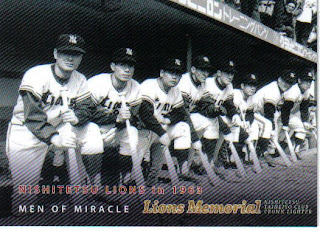 I mentioned a couple of days ago that I didn't know what the backstory of the Lions' 1963 Pacific League championship was. The Lions Memorial set had a six card subset for the "Men Of Miracle", but all I could figure out was that they had won the pennant by one game over the Nankai Hawks.

Well, I have some of the story now. Thanks to the Hanshin Tigers blowing a 13 game lead over the Giants this year, Michael Westbay's latest "Pro Yakyu This Week" webcast has a brief review of other epic collapses/comebacks in Japanese baseball history. In his summary of the webcast, he writes "In 1963 the Nishitetsu Lions were 14.5 games back on July 12 after which they went 49 and 26 (2 ties - .653) to take first place on October 8 and win the pennant." He also posted a list of the biggest comebacks in Japanese baseball history in this thread. The 1963 Lions were the second biggest comeback in history (and obviously the biggest when it happened) and the biggest that actually resulted in a pennant. Truly a miracle.

Thanks to Westbay-san for the information.

The card displayed in #37 from the Lions Memorial set.
Posted by NPB Card Guy at 8:27 PM