I just finished reading Rob Fitt's new biography of Kaname "Wally" Yonamine this past week and it was excellent. There was an interview with him (Rob Fitts) this last week over at East Windup Chronicle. During the interview, Rob said something I thought was very interesting: "Baseball card collectors will notice that he doesn’t show up in the Giants greats sets very often even [though] he was their best player in the 1950s." Actually, I hadn't noticed that before, but now that Rob had mentioned it, I'd have to look into it.

Not that I was surprised, since Rob Fitts knows more about Japanese baseball cards than I do, but Rob's right: Wally Yonamine doesn't show up in as much as you would expect in BBM's nostalgic sets. He does not appear in either the 1997 or 2002 Giants team set (which both feature subsets of Giants past stars including several of Yonamine's contemporaries) or the 2004 70th Anniversary Giants set (which is completely ridiculous). He also does not appear in the several of the annual "Historic" sets that you might expect to find him in: the 2002 All Time Heroes set, the 2005 Glorious Stars or the 2006 Record Makers sets. He also does not rate an appearance in the 1999 BBM set's "50's Best Players" subset.

I did, however, find these cards:

The 1992 BBM set contained a subset called "Nostalgic Stars" featuring stars whose heyday was prior to 1960. Yonamine has card #36: 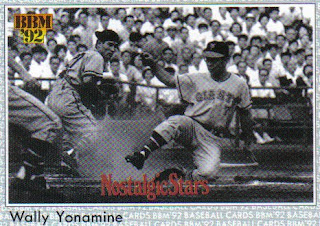 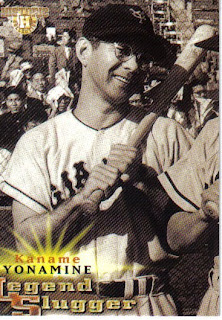 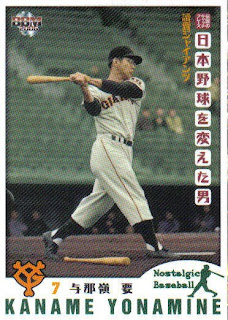 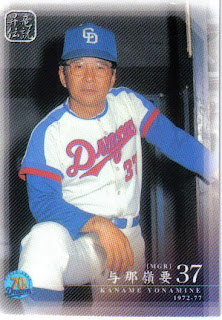 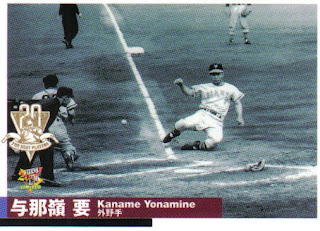 So I'll agree with Rob that it's odd that he doesn't show up more in the BBM nostalgic sets and subsets, but at least he has appeared in some of them.
Posted by NPB Card Guy at 9:59 PM