Card Of The Week September 21

I mentioned the other day that I thought the Taiheiyo Club Lions uniforms were among the ugliest in history. I thought I'd try to back that up by showing the only two cards I have that show these uniforms: 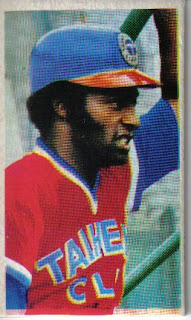 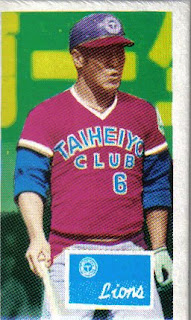 I don't think either card does the uniform justice. Neither card shows the wide red stripe down the side of the pants.

Actually, while these were ugly, they were only worn from 1973-75. In 1976, the Lions topped themselves with this (from "The History Of Uniform"): 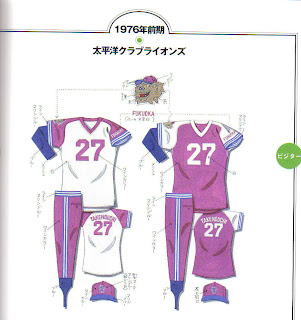 Now there are some fashion mistakes in Japanese baseball history. The wide stripes on the Swallows away uniforms in the 1990's, the solid blue pants of the Lions in the 80's and 90's, the Fighters rainbow-Astro wannabe uniforms of the 80's, the Hankyu Braves reverse pinstripe's of the early 60's (black uniforms with white pinstripes), the Hawks' green pinstripes, the Hawk-helmets of the late 80's and early 90's and some of the recent "interleague series" uniforms. Not to mention that stretch in the mid 70's when the Flyers wore different uniforms at different positions. But to me, nothing says beer-league softball team more than a solid maroon uniform with the number just as big on the front as on the back.

Or is that too insulting to beer-league softball teams?
Posted by NPB Card Guy at 9:09 PM